Fumito Ueda reveals plans for his next project to appear on Sony's next-gen console.

With Shadow of the Colossus' development complete, some gamers are already wondering if its creator is preparing for its next project. And this week, the question was answered by the game's director himself.

In an interview with Dengeki Playstation, director Fumito Ueda, who gained popularity with his first game, ICO, disclosed that he already has a few ideas simmering for a new game project. However, he added that none of them are far along enough conceptually to be built into a solid game like Shadow of the Colossus or ICO.

For the time being, it seems that fans of Ueda will have to wait until he comes up with an idea that he's comfortable with. Though no one knows what Ueda's next game will be, he did confirm that it will be a PlayStation 3 title.

Ueda admitted that the three years it took to make Shadow of the Colossus was a bit too long. (ICO was released in late 2001, so gamers had to wait four years until they could play his new game.) While Ueda hopes to release his next game in less time, he commented that there are still uncertain factors in developing games for the PS3.

In the portable sector, Ueda revealed he would like to make a game for the PSP. Ueda also commented that he has no interest in making games for mobile phones, even though that's the current trend of gaming in his country.

While the ICO development team is known for its games that portray a realistic world and include lifelike graphics, Ueda thinks it would be fun to create a game that goes in a different direction, such as adopting the use of cartoonish characters. 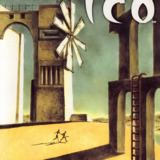 View Comments (42)
ICO
Shadow of the Colossus
The Last Guardian