We travel back in time and assume the role of a saber-toothed squirrel as we check out the Wii version of this movie-inspired platformer.

Released for last-generation consoles earlier this year, Ice Age 2: The Meltdown is an enjoyable platform game that's inspired by (rather than closely based on) the movie of the same name. In the game you'll spend the vast majority of your time playing as Scrat--a saber-toothed squirrel with a penchant for all things nutty and a rare talent for getting himself into trouble. We recently had an opportunity to spend some quality time with the upcoming Wii version of the game, and we're pleased to report that we had a lot of fun doing so.

Assuming the role of Scrat at the start of the game, your first task will simply be to collect as many nuts as you can find in the first area. The nuts are generally arranged in such a way that they lead you through each location in a linear fashion, but exploration is definitely encouraged and, more often than not, rewarded. To progress from one area to the next, you'll have to locate all of the golden walnuts in the level, which invariably means straying from the most obvious path and putting all of Scrat's skills to good use.

Early on, Ice Age 2 does a good job of easing you into its control scheme, which has been completely reworked to take advantage of the Wii controllers' unique capabilities. Basic movement and jumping is handled using the Nunchuk's analog stick and the Wii Remote's A button, while the camera can be repositioned at any time using the directional pad. Attacks are performed by moving the Wii Remote in any direction, and by combining attacks with jumps, it's possible to perform rolling and stomping moves. A powerful spinning attack is also available, though only when you've powered up your energy bar by collecting fruit. Initially, the only use you'll have for attack moves is smashing open blocks of ice to collect the nuts encased inside them, but it's not long before enemies such as boars, bats, beetles, and bears start showing up. Other controls that you'll be introduced to as you progress through the first few areas include using the C button to read signposts and to sniff out hidden nuts, moving the Wii Remote left and right to dig up buried items and to climb slippery surfaces, and throwing pebbles at enemies using the trigger buttons. Ice Age 2: The Meltdown's controls are uncomplicated, and at least in the early portion of the game, onscreen icons and signposts will appear quite regularly as a reminder of how certain actions are performed.

In addition to all of the running around and nut-collecting that you'll be doing, Ice Age 2 boasts a number of minigames that you'll be required to beat before you can progress through the story. For example, the first is a simplistic stealth game in which you'll have to collect nuts inside a cave while avoiding rustling bushes and the gaze of an irritable saber-toothed tiger. Anytime the tiger turns around to look at you, you'll have to press a button to play dead until he turns his back again. Other minigames that we played during our time with Ice Age 2 included 10-pin bowling with penguins instead of pins, a shooting-gallery-style game in which we were tasked with throwing pebbles at monkeys, and a perilous ride down a lengthy ice slide littered with obstacles.

Ice Age 2: The Meltdown for the Wii looks really promising right now and is certainly a good example of how Wii-specific controls can be worked into existing games. We look forward to bringing you more information on the game as its December release date closes in. 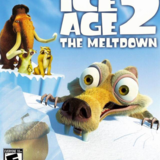