How Video Games Can Make You Forget Pain

We speak to cognitive psychologist Hunter Hoffman about the link between video games and physical pain, and why virtual reality is a better distraction than Mario Kart.

Inside the Human Information Technology Lab at the University of Washington in Seattle, cognitive psychologist Hunter Hoffman is using video game technology to help patients forget their pain.

Hoffman is a pioneer of virtual reality therapy (VR): a distraction technique that requires patients to immerse themselves in a computer-generated environment as a way to control and overcome physical pain. The therapy is based on an influential 1965 theory by Ronald Melzack and Patrick Wall referred to as "the gate control" theory: the idea that what a person is thinking, and where their attention is directed, can influence how much pain they experience. This is where SnowWorld comes in.

SnowWorld is a virtual reality world created specifically for use with burn patients. Developed by Hoffman and colleague David Patterson with funding from Microsoft cofounder Paul G. Allen and the National Institutes of Health (NIH), the game produces the illusion of floating through an icy canyon with a frozen river and waterfall as snowflakes drift down on the scene. As patients walk through the canyon, they use a PC mouse to shoot an unlimited number of snowballs at enemies, which take the form of snowmen, igloos, robots, penguins, flying fish, and wooly mammoths; as soon as the enemies are hit, they disintegrate and reappear later on (with Paul Simon songs from the album Graceland playing in the background.) To enter SnowWorld, patients look through a pair of virtual reality goggles with a wide field of view, commonly used by the military to train forces. Patients wear noise-cancelling earphones, while specialized hardware holds the VR goggles near the patient's eyes. 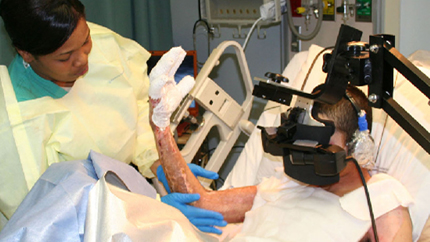 The game is specifically designed to help burn patients during wound care, a painful process that involves cleaning and re-administering bandages and treatments several times a week. While conducting early clinical trials with healthy volunteers, Hoffman and Patterson found a significant correlation between the potency of the illusion--how strongly the subjects felt they were immersed in the virtual world--and the alleviation of pain, administered in small doses during the trial. Using functional magnetic resonance imaging (fMRI), Hoffman and his team scanned the brains of healthy volunteers using SnowWorld to measure what effect the game had on their ability to register pain; the results showed on average 30 to 50 percent reductions in pain.

There is a limit to how much information people can process--with burn patients, playing SnowWorld leaves less attention available to process signals coming in from pain receptors, patients spend a lot less time thinking about their pain during wound care.

"Expecting pain is one way psychological factors can amplify or increase how much pain a patient can experience," Hoffman says. "The logic behind virtual reality pain distraction is based on a very old concept….as old as using a baby rattler to distract a baby from crying. I think most distractions are simply not compelling enough to compete with pain for attention at the level we are seeing VR work. There is a limit to how much information people can process. With burn patients, playing SnowWorld leaves less attention available to process signals coming in from pain receptors; patients spend a lot less time thinking about their pain during wound care."

Hoffman first became interested in blurring the distinction between reality and virtual reality during his time as a pre-graduate assistant of Marcia Johnson, a memory researcher at Princeton University. Johnson originated a theory called "source monitoring," centered on figuring out how people remember if something really happened, or if they only imagined it did. When he began work at the Human Information Technology Lab in Seattle, Hoffman began using virtual reality to test his theory that the stronger the illusion of going into a virtual world, the more attention would be devoted to that information. This idea parallels the argument that video games, as a form of interactive media, are more immersive than noninteractive media such as films, books, or music.

But Hoffman discovered that consumer video games just aren't immersive enough to do the trick. In an experiment using two teenagers suffering from severe burns, Hoffman and Patterson had both patients play Mario Kart 64 and Wave Race 64 on the Nintendo 64, as well as a virtual reality game called SpiderWorld, an earlier version on SnowWorld designed to help phobic patients overcome their fear of spiders by slowly introducing them to the arachnids in a virtual kitchen environment. (Both patients played while undergoing wound care.) What Hoffman and Patterson found was that both patients experienced a reduction in pain and time spent thinking about pain when playing SpiderWorld than when playing the Nintendo titles.

"While the graphics are better in video games than in SnowWorld, the high immersion of the VR system is thought to be the key difference. The wide field of view VR goggles stimulate both central and peripheral visual fields and block patients from being able to watch their wound care or to even see the hospital room." 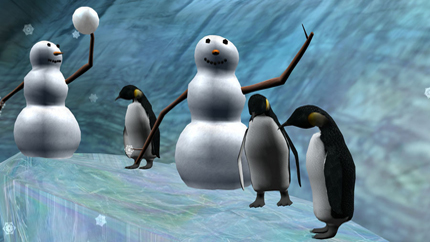 SnowWorld may be graphically crude, but it works.

"Hundreds of thousands of soldiers return with some major psychological problems that need to be treated," Hoffman says. "For example, if a soldier sees a terrorist blow up civilians in Iraq, those images can haunt the soldier later, causing nightmares and a wide number of other symptoms. Combat-related post-traumatic stress disorder is known to be unusually challenging to treat. If successful, VR could help hundreds if not thousands of lives of young US troops with psychological issues that need to be addressed to accelerate their reintegration into society."

Encouraged by their results with SnowWorld, Hoffman, Patterson, and UW anesthesiologist Sam Sharar MD are seeking funds to develop SnowWorld 2.0: SuperSnowWorld, which will add lifelike human avatars, a multiplayer option (so two patients or a patient and a caregiver can play together), as well more enemies (monstrous insects and animated sea creatures are at the top of the ideas list). Hoffman is confident that with more research and clinical trials, VR therapy can one day be used regularly to help treat a wide range of anxiety disorders, from phobias to more severe cases of post-traumatic stress disorder, as well as alleviating pain in medical procedures, surgery rooms, physical and post-injury therapy, right down to everyday pains and fears, such as a trip to the dentist.

"The illusions produced by these programs are nowhere near as sophisticated as the world portrayed in films like The Matrix. Yet virtual reality has matured enough so that it can be used to help people control their pain and overcome their fears. As the technology continues to advance, we can expect even more remarkable applications for virtual reality in the years to come."