How Video Games Are Improving the FBI

Inside a well-lit classroom overlooking the leafy campus of the Federal Bureau of Investigation (FBI) Training Academy in Quantico, Virginia, a group of new recruits are about to use an Xbox 360 controller for the first time.

The man at the front of the classroom, Randy Pargman, will first explain what each button on the controller does, before encouraging the recruits to turn the controller in their hands and get a feel for its size and weight. He will then turn toward the large PC sitting on his desk and begin to play a video game.

The game is designed to teach budding FBI agents how to successfully plan and carry out a nonviolent arrest. In this particular demonstration, Pargman will control the onscreen FBI agent and direct him to a small area resembling a nondescript motel. The gameplay itself is simple enough: Pargman will begin by interacting with a small number of non-player characters--the motel's receptionist, a member of the cleaning staff, a passer-by--with the aim of discovering more information about the suspect before the arrest is carried out: who he is, where he's hiding, and why he's wanted for arrest. Only then can Pargman begin to execute the arrest strategy, surveying possible escape routes, picking the right weapons, and directing backup to seal off the exits.

Finally, when everything is ready, Pargman will carry out the arrest simulation. This, the class understands, is the good bit.

Why Games Are Useful Learning Tools

Pargman has been working at the FBI Training Academy since September 2004, swapping his background in computer science for a mentor role in training new recruits to navigate a set of interactive animations and video games. The games are designed to teach FBI agents to safely navigate crime scenes, clear stairwells and hallways during a siege, carry out nonviolent arrests, and properly preserve and package evidence for forensic analysis, and they have proved to be one of the most crucial parts of the FBI's training program.

"I have a sneaking suspicion some of the new recruits bring their consoles with them when they enroll in the academy," Pargman says. "Surprisingly, quite a few of them have never touched a video game controller before, and I have to spend quite a bit of time in class teaching them how to use the thumbsticks. What we've started doing is giving them the chance to play around with the games after hours, and it's no surprise that they love it." 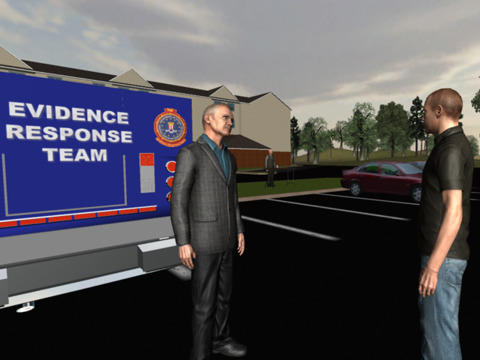 The FBI uses interactive simulations like this one to teach trainee recruits how to carry out arrests in different situations. Image credit: FBI.

What Pargman has learned from watching his students interact with games is that there is a real benefit to putting into practice the concepts and values taught through visual demonstrations. So much so that a large number of new recruits have already expressed the wish to be introduced to the video game training part of the program at a much earlier stage in their training.

Currently, the gaming component of the course takes place somewhere in between theory and practice. The latter, which is carried out in Hogan's Alley, is a physical training environment inside the FBI campus. The so-called "alley" is actually a mock town: houses, buildings, and structures that can accommodate almost any type of real-life scenario. But it's only so big, and it's not long before the new recruits have seen everything there is to see. That's when Pargman brings out the Xbox 360 controllers.

"In our interactive simulations, we can instantly go from one city to another and present the recruits with far more interesting tactical environments. After one of our multiplayer first-person shooter simulations, we've heard people say quite a few times that the environments we presented them were more interesting and challenging than anything we could ever physically build."

It's Not All About the Guns

The games themselves are either developed in house by Pargman or outsourced when greater skill and manpower are required. The trainee agents begin by first learning how to use the system and its controls--all Windows-operated PCs attached to Xbox 360 controllers--and are then given a practice run with a game depicting a nonviolent situation. Here, they must use the game to plan and execute an arrest, from communication and surveillance right down to choosing the correct weapon (forget indulgent first-person shooter fantasies of five different guns, three types of grenades, and a rocket launcher; there's none of that here). They then use a top-down view in the game that allows them to plan every detail of the arrest, from where to place the 12 agents at their disposal to what vehicles and equipment they require. At the end of it all, they give a mission briefing to their fellow classmates.

"We're controlling the other critical characters in the game so we can react accordingly to whatever happens--moving them, running away, or pulling out a gun or a knife if there's need for it," Pargman says. "We try to exercise whatever the weak points of the plan are. At the end, we can replay the whole thing in the classroom so everybody sees what happens. That's a key difference to doing things in real life; this way, we can actually look at the action replayed from any point of view."

"Interestingly, we found that the trainee agents really appreciate when we put the camera on the point of view of the suspect and show them what he saw when he was being arrested; this often is beneficial in pointing out whether all the escape routes were covered by the plan or if something was overlooked."

Aside from the immediate benefits of allowing trainee agents to interactively work through different scenarios that cannot be physically replicated and thereby assess different points of view, games have also proved psychologically beneficial for the new recruits. Pargman and his team have noticed reduced stress levels in trainee agents since the program began to rely more heavily on video games and simulations.

"We've had quite a few students say that in Hogan's Alley, they have a lot of pressure on them. There are so many things going on, it's such a complex scenario, they know they're being graded, and they only have a few runs through it, so sometimes they have so much stress they have a hard time paying attention to the lessons. But when they're in the classroom playing the games, they're able to pay attention to things they wouldn't normally pay attention to in physical training." 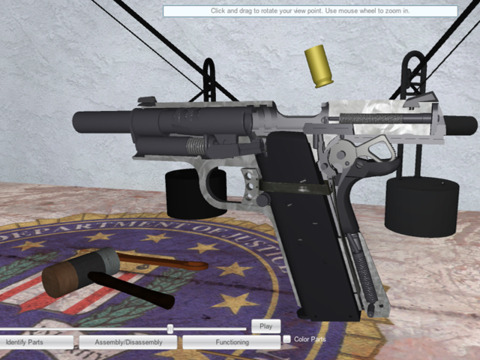 Since developing the games program for the FBI Training Academy, Pargman has begun to think more seriously about how video games can help other law enforcement organizations. When serious games first came to market, they provided a new way of doing things, making it possible to teach concepts that could previously only be taught through language or visuals.

But the gaming audience has grown significantly in the past five years, resulting in a more knowledgeable and game-savvy population that has come to know what to expect from games. The wow factor of serious games has dissipated, and many serious games developers are finding it increasingly difficult to make a product that is both educational and entertaining.

"These games need to be interesting, engaging, and relevant, so that people who use them will get into it, and then it's up to the design of the game to make sure that they're actually learning what they're supposed to be learning," Pargman says.

A regular attendee of the Serious Games Summit and the Game Developers Conference, Pargman believes that the nonprofit sector of the industry has the potential to inject some much-needed creativity into serious games development, a creativity that organizations like the FBI can use to develop more efficient training and educational programs.

"I think those ideas and creative energy is pushing the space forward, and more and more people, as they see those projects evolve, will hopefully make the connection that we can do a lot of learning this way through serious games, in traditional education, as well as corporate environments and government. Games could be used to great effect, much more so than we're doing now."