How To Unlock The True Ending In Shovel Knight: Pocket Dungeon

To see the true ending, you need to complete four special tasks within a single run of the rogue-lite puzzler.

Shovel Knight: Pocket Dungeon is a rogue-lite puzzle game, blending action mechanics with tile-matching puzzle elements to create something completely new. The Adventure mode is the main focus, where you unlock various characters and make your way through the story. But even once you reach the end, it's clear there is still more story to tell. Here's how to get the "true" ending in Shovel Knight: Pocket Dungeon.

Once you've made it through the 10 stages and defeated Puzzle Knight, you've finished the game. Kind of. You'll see credits, but the game telegraphs pretty openly that someone has been pulling Puzzle Knight's strings, and he's just as trapped in the Pocket Dungeon as any of you. To progress further, you need to pull off an array of difficult feats, and it all starts with four special shrines.

Chances are you came across at least one of the shrines on your standard runs through the game. In many stages, a black vortex appears, and entering it will take you to either a bonus area or a shrine. The Shrinemaster, a giant skeletal figure, guards each shrine and demands special criteria to enter and claim the key fragment inside. To unlock the true ending, you need to gather all four key fragments in a single run.

Where to find the Key Fragments

The key fragments appear in the third, sixth, eighth, and ninthstages of the game. By default, the stages go in a set order, which means these fragments would appear in the Lich Yard, Chromatic Caverns, Stranded Ship, and Flying Machine.

If you've set your stage order to Random in the options menu, however, the key fragments will still appear in the numbered stage order. For example, even if the random order takes you to the Lich Yard first, you won't find the corresponding key fragment there. You'll find it in whichever stage is third. This helps maintain the balance of how you should be able to handle the criteria for each key fragment by the time you reach it.

The First Key Fragment: The Shrinemaster demands you hold three keys to unlock a gate. You can store keys between stages, so just try to hold on to a key or two when you don't need them in the easier early stages so you'll have them to use to unlock this shrine. The first time you unlock it, you'll also find Shield Knight, and she'll join your camp as a playable character.

The Second Key Fragment: The second time around, the Shrinemaster asks you to give up one HP. It helps if you've gotten a Meal Ticket upgrade so that this doesn't hit you as hard, especially if you're playing as a character with a smaller total health pool. The first time you enter, you'll also see some more story content.

The Third Key Fragment: The third piece requires you to be flush with cash. This time, the Shrinemaster will ask for 20,000 gems, a hefty sum that could almost pay for two Relics by that point in the game. It's unlikely you'll be able to gather up this many gems in a single stage before leaving it, so you may need to plan ahead and forgo upgrades in the previous stage to have enough gems to purchase your way in. The first time you enter, you'll also find the Black Knight, and he'll join your camp as a playable character.

The Fourth Key Fragment: The fourth and final piece is a unique boss fight against the Shrinemaster. By this point in the game you probably have a solid handle on your build, so just stick to the strategy you've developed to take him down and claim the final piece.

With all four key fragments assembled, continue to the Scholar's Sanctum and defeat Puzzle Knight as usual. With the key fully assembled, defeating Puzzle Knight will lead to more story segments and an entirely new area, along with two additional boss fights. Defeating this extra-hard gauntlet--and again, doing all of this in a single run--will earn you the true ending. 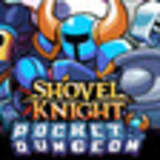