Best Of 2021: How Tales of Arise's Menu Background Tells A Story Of Its Own

Art direction and aesthetic can be utilized for narrative storytelling.

Tales of Arise is one of 2021's best RPGs, and Bandai Namco really stepped up its game when it came to one of its longest-running franchises. However, while a heartfelt story and frenetic combat is everything that a JRPG needs, what really helps the game stand out is how visually striking it is–something that even extends to its menu. Slight Tales of Arise spoilers ahead.

Compared to previous games in the Tales series, Tales of Arise is a cut above, taking the best parts from its predecessors while developing a style all its own. Not only do the 3D character models look more proportionate and the environments shine vibrantly, the game still retains its beautiful 2D artwork as well. In particular, the base menu in Tales of Arise features an absolutely gorgeous watercolor painting of all of the playable characters in the party. However, the special part of the menu is that it ultimately changes depending on where the player is during the story.

At the very beginning of the game, the first two characters you meet are Iron Mask and Shionne. Rather than showing them side-by-side, the menu shows both of them facing away from each other, a reflection of how the pair feel about one another. They don't exactly get off on the right foot, and the fact that the background is dark and fiery just adds to the tension. This menu art represents the animosity and friction between them when they first meet.

As the story progresses, the menu also takes into consideration wardrobe changes or missing party members. When Iron Mask loses a chunk of his mask early in the story and his actual name, Alphen, is finally revealed, the menu reflects his new look and provides a brand-new portrait for the menu. If one of the party members is away due to story reasons, then the menu will show that as well.

When Alphen and Shionne start meeting the other characters who eventually join the party, the menu shows a separate portrait depicting them rather than the whole party at once. This helps highlight which characters are currently important to the plot and what the situation is. Below, you can see Law (left) in his jacket and without his signature fisticuffs. At this point he hasn't officially joined the party yet, and the worried look on his face shows that he's unsure of himself and lost–something that gets rectified through character development later on.

Below is another example from when Alphen and the team met Dohalim and Kisara. With Kisara's big shield and confident stature, the menu reflects her initial relationship with Dohalim as his guardian.

As Tales of Arise comes to a close, there's a major plot event that recontextualizes Alphen and Shionne's place within the game's story. While I don't want to spoil anything, the final menu background that comes after the revelation is stunning as it shows Alphen and Shionne with some drastic outfit changes for their final looks. As I was nearing the end of my time with the game, I felt like I had earned that artwork. The plot threads and character development were all coming together, and seeing all of that culminate into that final background had me swelling up with emotions and memories of a grand adventure.

Throughout the game, players will open up the menu hundreds or thousands of times, and being reminded of where you are–and how far you've come–provides the perspective of having gone on an epic journey. There's often talk about environmental storytelling in games, looking at the area around the player to pick up signs of a narrative, but art direction and aesthetic can also be utilized to do something similar as well. And hey, as an added bonus, the backgrounds make for great wallpapers, especially with the HUD removed. 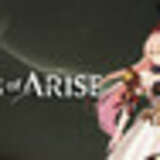