How Long To Beat The Gunk: Mission List And More

The new game from the SteamWorld team makes for a solid weekend playthrough.

December is usually very quiet on the new release front, and though this year is really no different, the month isn't totally devoid of new games, even now as we cross the halfway point. The Gunk is here to give players on PC, PlayStation, and Xbox (including Game Pass) a brand-new IP to tackle just before the new year. If you're wondering how long it takes to beat The Gunk, we've run through all it has to offer and can help prepare you for what's ahead. Here's all you need to know.

How long is The Gunk?

A single playthrough of The Gunk will take you about 6-8 hours to complete. The game is mostly quite linear, though there are some optional paths that you can go down in order to find more crafting resources on your travels. You'll want to do this, most likely, as crafting all of the game's 15 upgrades will require you to find just about every last collectible resource on the alien planet across the game's eight chapters.

There are four kinds of crafting elements, which you can learn more about in our beginner's guide for The Gunk. There are no alternate endings as best we can tell, nor any side missions. This is a rather straightforward action-platformer with some light combat elements. More than anything, what The Gunk does well is in its setting and music.

The alien planet has a rich history that you'll unravel throughout the game's story as you push back against the game's titular pollutant extraordinaire. New characters will emerge on your journey, while other familiar faces will be seen in new ways in this intimate story of friendship among the stars.

The Gunk comes from Image & Form, the team behind the popular genre-bending SteamWorld series. This marks the team's first foray into a 3D game after a half-dozen SteamWorld games have explored genres such as strategy, RPGs, and tower-defense, among others.

The Gunk launches today on PC, PlayStation, and Xbox platforms including its day-one arrival in the Game Pass library. For more on the new game, check out our beginner's guide for The Gunk. 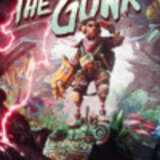