How Journey Inspired The Musical Atmosphere Of A Memoir Blue

A Memoir Blue is an upcoming puzzle game with an atmosphere-driven story. It stars champion swimmer Miriam, who begins to think back on her childhood with her mother. A Memoir Blue doesn't use dialogue to tell its story; instead, it primarily uses music and its visuals to relay what's happening. Creative director Shelley Chen says she took inspiration from Thatgamecompany's Journey when designing the game.

"Journey is definitely my life changer game," Chen said. "My coworker introduced it to me and when I played it, I was mind blown. Back then, I was working on strategy and shooter games, and I wasn't really into it. I liked games in general but playing Journey--that was when my life completely changed."

Similar to Journey, A Memoir Blue is designed to immerse players in certain feelings and sensations, rather than an explicit storyline. When I spoke to Chen back in July about why A Memoir Blue incorporates both 3D and 2D animation, she spoke about how it not only helped liken the game more to a storybook, but it allowed for two different styles of character expressions. You can accomplish expressions with 2D characters that are harder to do in 3D, and vice versa.

"We want the players to completely immerse in the mood of the game," Chen said. "We want them to watch the animation, to look at the characters' expressions, and to really feel how they feel. So those [songs] become the dialogue."

A Memoir Blue incorporates autobiographical elements, with certain scenes and aspects of Miriam and her mother's story acting as a reflection of Chen's relationship with her own mom. "I always wanted to put music in the game," Chen said. "Part of the reason is because me and my mom were really into music. In my childhood, my mom and I would always sing together, and we would listen to songs together--music was an important thing that connected me with my mom, having a song to transmit emotion. That's why [music] is part of the game."

A Memoir Blue is scheduled to launch for Xbox Series X|S, Xbox One, PS5, PS4, PC, Switch, and iOS. The game will also be released on Xbox Game Pass. 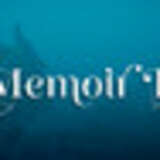