EA talks about attempting to make a game with graphics so good that even those who aren't interested in UFC will buy it.

I'm entranced by the sight of UFC light heavyweight champion Jon Jones' rippling pectoral muscles bouncing around the Octagon. That's me, by the way. Lying on the ground is Alexander Gustafsson, the other guy, whose stomach rises and falls with each simulated breath, seconds before Jones crash lands on top of him into a flurry of punches, quickly securing victory by TKO. I win! Sure, it's not the most refined and discerning train of thought I've ever had, but I'm spending a lot of my time ogling the graphics. Because, captured at the right angle, watching a round of EA Sports UFC play out is mesmerising.

EA Sports UFC is both EA's first title to only support Xbox One and PlayStation 4, and its first entry in the UFC license after the publisher and UFC owner Dana White resolved their "war" from back in 2009 this time last year to become best friends, honest. But developer EA Canada now has a new battle of its own to solve; much of its potential playerbase almost certainly don't know how to throw a proper punch, let alone handle the multiple combat disciplines on display in MMA. How is it possible to strive for a sense of authenticity when almost all of the game's players won't be able to actually understand it? The solution, at least to me, seems to be to capture the recognisable sense and feel of the UFC broadcasts, emulating the the way the sport looks on TV than rather how it plays out in real life.

Emulating the way UFC is broadcast is something EA has obsessed over. "Our replay and presentation cameras mimic the stuff that fans are used to seeing," says creative director Brian Hayes. "When you throw something in there that is 'video gamey', like if we're going to attach a camera to the fist as it flies towards your opponents face, that's something that, although it can look cool, immediately snaps you out of the immersion," he continues, arguing that such a mechanic would take away "the sense that you're actually watching a real event."

"I think, as a general philosophy, EA Sports is really focused on striving for more authentic sports broadcast presentation," Hayes adds. It's a very different approach from EA's last attempt with the sport in 2010's ill-fated MMA, which showed an x-ray camera when dealing with submissions. UFC, on the other hand, has submission attempts play out via an octagon-shaped mini-game, and it's the one moment of gaminess in an otherwise painstaking emulation. Like Hayes said, even this tiny detraction cracks the illusion.

One of the most daunting parts of an MMA game is capturing the amount of martial arts disciplines and the various elements of a fight--striking, grappling, submissions, the ground game--into an understandable control system. The four face buttons control striking, with attacks modified by the bumpers. The right trigger is a general purpose block, though it can be modified to specifically, and more effectively, guard high or low attacks by pressing a punch or kick button. Time a block just right and you'll leave your opponent open to a counterattack, in a fashion similar to EA Canada's Fight Night series.

But that's all the stuff that's easy to understand, basically. "People almost instinctively understand standing in front of somebody and throwing punches and kicks, because there's a long history of games--whether it be Fight Night, Street Fighter, Soul Calibur, or Tekken--where you stand at striking range and throw different strikes at an opponent that can block, and defend, and move. But when things go to the ground? That's where everybody is a little bit lost."

I know I am. I've done my best to avoid taking fights to the ground in every UFC game I've ever played. But EA's take on the series has opted to make this part of an MMA brawl more lethal than previous titles. Matches can easily be won or lost by securing an advantageous position on the floor. "It's the thing that varies the most from any [UFC] game that's come before us," adds Hayes."

Be warned, then: those who pick up UFC at launch and intend to take it online might have to deal with a lot of submission attempts coming their way in the first few weeks. "At the beginning of the EA Sports UFC lifespan there will be people that are the Royce Gracies' at UFC 1," Hayes predicts. "The people that take the time to learn the submission game, and dominate so many other people, until they realise how to handle submissions and level the playing field. There will definitely be an upside for users who take the time to learn the submission side and get good at it."

There's more risk and danger, then, as players frantically tussle to get into, or get out of, the full mount with quarter-circle spins of the right analog stick. Most new players tend to lose their cool at this point, Hayes says. "As soon as a fight goes to the ground and people are playing for the first time, they just starting hitting every single controller input they possibly can. It's always better to try and do one thing, see if it works, and if not try something different. Don't try eight things at the same time."

Overall, Hayes argues that this lethal ground game will work out after players take the time to adjust to it. "If it doesn't seem dangerous then the impetus for you to learn, and grow, and get better, is lessened."

Hayes is also expecting that some people will pick up UFC based on the strength of its visuals, in a situation reminiscent of Fight Night Round 3 during the last console generation. "We knew that the performance of Fight Night Round 3, as a boxing game, really outpaced the popularity of boxing as a sport. It really performed the way it did on Xbox 360 and PlayStation 3 because people had just gotten these new gaming consoles, and it was one of the first games that came out that people said 'oh yeah, that's why my PlayStation 2 isn't good enough anymore.'"

"So we saw the exact same opportunity [with EA Sports UFC]. It's why we've spent so much effort on making the game look like it does. People will have purchased their Xbox One or their PlayStation 4, and they're going to be looking for something that makes them happy about their decision to upgrade. That's one of the things we really focused on."

As a developer heavily invested in the strength of their graphics, then, how is EA Canada finding working across the Xbox One and PS4. What console is easier for developers to work with? "The technology in each box is slightly different. The game on PS4 looks slightly different from Xbox One because of, like, black levels, and different things. If somebody asked me: what's better black levels? I don't know. That's really up to you."

Hayes also adds that the game's tech guys were looking at the possibility of having the game run at a higher resolution on PS4 in time for the game's launch: the UFC demo runs at 1600x900, according to a Digital Foundry report. "They were looking at whether or not we could have the PS4 [version run] at a higher resolution," he says, "but whether or not their investigations were successful? I don't know at this time."

EA Sports UFC will be released for Xbox One and PlayStation 4 on June 17. 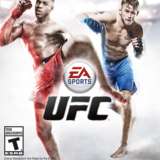