How Crytek Triggered My Fear of Heights in Virtual Reality 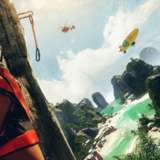 Heights terrify me. At more than 15 feet above solid ground, the symptoms kick in: vertigo, shortness of breath, and the inability to speak or think clearly. It used to be worse, sometimes resulting in panic attacks. But about three years ago, I began rock climbing in the hopes of overcoming the phobia. Confronting that sense of height and scale helped--if only a little.

So I was surprised to feel that same fear grip me as I donned an Oculus Rift recently. Crytek's The Climb places you in the digital harness of a rock climber, and as Crytek's David Bowman guided me through the controls of the upcoming virtual reality title, he accompanied his instructions with the golden rule of climbing: "Don't look down."

Of course, I looked down.

The sense of scale hit me immediately, as did the elevated position I occupied. Any false sense of security escaped me. My head started to swim. The textures of the outcrop beneath me, and the trees lining the ground far below, composed a haze of green and brown, distorted by the distance. As long as I held the triggers on the Xbox 360 controller, I'd maintain my grip on the virtual handholds--but that didn't stop my palms and lower back from sweating.

"VR is good for exploration," Bowman said. "But it's really great with presence, and with scale. The Climb, specifically, shows you can do verticality in VR."

By looking above, to each side, and sometimes below, the Rift directed one of my two floating hands toward my next handhold, while my other phantom appendage secured me to the cliffside. The Climb will release with full Oculus Touch controller support (individual controllers that wrap around each hand), but as of the demo I tried, hand controls were relegated to a normal controller.

When I forgot to re-chalk, the grip meter would begin to deplete in front of me. This is where Oculus Rift creeped deeper into my mind; sensing the possibility of an upcoming fall, the blood in my legs swirled and felt like they had drained away. Of course, I knew my feet were planted firmly on the carpet of a hotel floor, my hands wrapped around the familiar handles of a controller. But as is often the case with VR, my presence in a digital environment toyed with my sense of place.

VR is good for exploration. But it's really great with presence, and scale.

The demo I played took place in Southeastern Asia, on one of the region's easy courses. Although it wasn't especially challenging, it did require concentration at certain junctures. I had to jump wide gaps, for instance, and during the split second before I grabbed the opposite ledge with both hands, my stomach fluttered, my vision grew faint. On the higher difficulties, gaps will be wider, ledges farther apart, and more thinking required as climbers make their way between checkpoints.

Crytek isn't aiming for an exact rock climbing simulation, though. Jason Rubin, president of worldwide studios for Oculus, was also present during the demo, and was quick to stress that in the end, The Climb is a game. It has time trials, multiplayer, and leaderboards. it even has checkpoints in the form of carabiners you can hook into.

"The goal with The Climb was to have replayability, progression, and scoring," Rubin said. "We really wanted to consider the people that like games, and that's a big part of what drove this idea."

Oculus and Crytek plan to release The Climb around the Oculus Rift's launch in 2016. The Climb will include several other locations apart from the Southeast Asia of my demo, each with their own courses of varying difficulties.

I only spent 20 minutes with The Climb, but in that time, it provided a vivid sense of place, and elicited a real physical reaction as I scaled the ledges and rocky crags of its digital environment. That alone has piqued my interest. Despite my inherent fear of heights, and the uneasiness that often accompanies that fear, I'm eager to play a fuller version next year. Even if my legs shake, and vertigo rears its ugly head, I'm eager to play again.

Mike Mahardy on Google+
Got a news tip or want to contact us directly? Email news@gamespot.com

EA Was Reportedly In The Mix For Activision Blizzard Deal

Dying Light 2 For Nintendo Switch Has Been Delayed

Will Guitar Hero Come Back Under Microsoft? Kotick Says The Xbox Company Has Resources To Do It