How Animal Crossing Was Born From One Of Nintendo's Biggest Flops

Before it became a global hit, Nintendo’s beloved life sim began as a project for a failed N64 accessory. 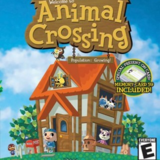 April 14 marks the 20th anniversary of the original Animal Crossing's debut in Japan. To commemorate the occasion, we are reposting this piece, originally published last year to coincide with the release of Animal Crossing: New Horizons.

Nintendo's charmingly offbeat life-sim series Animal Crossing finally made its long-awaited debut on Switch with the release of Animal Crossing: New Horizons. The game arrives nearly 20 years after the franchise first premiered on the world stage, and in that time it has grown into one of Nintendo's marquee properties, appearing on almost all of the company's modern consoles and shifting millions of copies worldwide. But while Western fans were introduced to the series with 2002's eponymous Animal Crossing for GameCube, the franchise actually originated on Nintendo's previous home system, the Nintendo 64, and it was initially born out of one of the company's biggest commercial failures.

The very first Animal Crossing game, known in Japan as Dobutsu no Mori (or Animal Forest), was the brainchild of two Nintendo designers: Katsuya Eguchi and Hisashi Nogami. While neither may have the name recognition of Shigeru Miyamoto or Eiji Aonuma, each has had a hand in creating some of Nintendo's most beloved titles. Early in his tenure at the company, Eguchi designed levels for Super Mario Bros. 3 and would later direct Star Fox and Wave Race 64. Nogami, meanwhile, worked as a character designer on Yoshi's Island and Mario Kart 64 (and would eventually go on to produce another breakout Nintendo franchise, Splatoon).

According to Eguchi, Animal Forest was originally envisioned for the 64DD, the ill-fated disk drive peripheral for the Nintendo 64. "It began life as an N64DD project. Then we came up with the concept of 'a game where you hang out and do stuff with a bunch of people in a single field.' Then one by one, we started coming up with more ideas, and [Animal Forest] is really just the collection of all those different strands," Eguchi said in a 2003 interview. "In short--we just wanted to make something for the 64DD," Nogami summed up.

Like the Satellaview accessory for the Super Famicom, the 64DD attached to the N64's underside and expanded the system's functionality with a range of additional hardware features, including a drive for rewritable floppy disks, a real-time clock, and even limited internet connectivity. These features, Nintendo touted, would inspire new kinds of games and genres, and indeed, the company's designers seemed energized by the possibilities it opened up. "There are so many ideas I wouldn't have been allowed to come up with if we didn't have the 64DD," EarthBound creator Shigesato Itoi said in 1997.

The 64DD's real-time clock in particular was instrumental to Animal Forest's conception. The entire game was premised around this feature. Just as in the real world, days and seasons in Animal Forest would pass according to the calendar, so your village would be blanketed in snow during the winter months, and cherry blossoms would bloom during the spring. In turn, different types of fish and insects would emerge depending on the time of year, and holidays would be celebrated in the game as they occurred in real life. This created the sense that Animal Forest was a small, living world marching along inside of your console, even when you weren't actively playing it.

Despite the 64DD's potential, the peripheral was plagued by setbacks. Nintendo originally intended to launch it in 1997, a year after the N64 itself, but the company encountered numerous hurdles during its development, causing it to be repeatedly delayed. When the 64DD did finally hit the market in late 1999, near the end of the N64's lifetime, only a small handful of games supported it, and the accessory would be unceremoniously discontinued a little over a year after it launched.

With the 64DD effectively a nonstarter, Animal Forest would instead be released on a standard N64 cartridge, but the developers still found ways to incorporate features that were inspired by the 64DD without utilizing the actual hardware. Since the N64 itself did not boast an internal clock, Nintendo would include a battery-backed clock in Animal Forest's cartridge, allowing the game to track the date and time that way. Similarly, instead of storing additional data on the 64DD's floppy disks, the game would make use of the Controller Pak--a memory card that plugged into the back of the N64 controller. These workarounds allowed the developers to release Animal Forest on the base N64 hardware without sacrificing its most distinctive features.

Animal Forest would launch in Japan in April 2001, making it one of the final first-party titles to hit the system before it was supplanted by the GameCube later that year. This unfortunate timing undoubtedly hampered the game's potential, and the N64 version would never be released outside of Japan. The title would, however, get a second lease on life when it was ported to the GameCube that December. Nintendo's new system would prove to be a more fitting home for the game, as many of the features the 64DD offered--including a real-time clock--were built right into the GameCube's hardware.

The title would make its debut in the US as Animal Crossing the following year, after some extensive localization changes. The game would eventually go on to sell more than two million copies worldwide--an impressive number for what was at the time a new and unconventional franchise. However, its follow-up, Animal Crossing: Wild World for DS, would truly propel the series to worldwide popularity. Wild World would move more than 11 million copies during its lifetime, and each mainline installment to follow would likewise become a multi-million seller, with New Leaf shifting more than 12 million copies on 3DS.

Each of these games built upon the original Animal Crossing's foundation with new features, activities, and customization options. But the core appeal of the series remains its leisurely, real-time pace--and that has its roots in the 64DD. The peripheral may have been a costly flop for Nintendo, but it did indeed inspire a new kind of game, just as the company promised.