House of the Dead lurches onto Wii

Second and third games in zombie shooter franchise compiled for release on Nintendo's console next spring.

Resident Evil: Umbrella Chronicles has the coveted zombie-lightgun-style-arcade-shooter-for-the-Wii subgenre cornered, but Sega is looking to break Capcom's death grip on the market. Today, Sega announced that it is prepping The House of the Dead 2 & 3 Return for the Wii.

Sega has not specified what changes would be made to the original games, but it did say the game will use the Wii Remote and the Nunchuk (and be designed with the Wii Zapper in mind as well). No price point was announced, but Sega expects the game will ship in spring 2008. 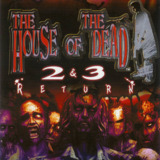