Atlus will release both upcoming role-playing games in mid-December.

Comments
Atlus has confirmed the release dates for two of its upcoming games. Hoshigami: Ruining Blue Earth, its PlayStation game developed by MaxFive, will be released on December 10, while the PlayStation 2 game, Wizardry: Tale of the Forsaken Land, will be available in North America on December 17. Additionally, Atlus released Tsugunai: Atonement, the role-playing game published by Sony in Japan, this week. GameSpot will have further coverage on the company's games in the coming weeks. 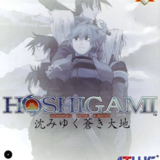