The anthology, which collects together four narrative-focused experiences, is now available on these systems.

Stories Untold, an anthology of four horror-tinged narrative games, has surprise-launched on PS4 and Xbox One. The title, which released on PC back in 2017 before coming to Switch earlier this year, is now available for new audiences to check out.

The four smaller games included are:

As a remake of an earlier title, The House Abandon is the most well-known game in the collection--a metatextual text adventure with a cool, dark twist.

Stories Untold is from developer No Code Studio, which followed the title up with the brilliant Observation. The studio has focused on scary story experiences across its first two games, both of which were published by Devolver Digital.

The game received a 7/10 in GameSpot's review, with The Lab Conduit and The Station Process standing out as the best parts of the anthology. It's a good creepy game to play over Halloween. If you want more horror for the spooky season, check out GameSpot's recommendations. 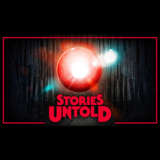