We put our mental dexterity to the test with a hands-on demo of Honeycomb Beat, a simple but challenging new puzzle game for the Nintendo DS.

The game is called Honeycomb Beat, but it doesn't involve bees or cereal. Instead, it's a very simple puzzle game involving hexagonal panels that you tap, or "beat," to make them change colors. The object of the game is to change all of the panels to the same color in as few beats as possible. It seemed simple enough, but after playing a handful of the puzzles, we found that the game offers a substantial challenge, and it's pretty addictive, as well.

There are three modes in Honeycomb Beat: the very short and simple tutorial mode, a puzzle mode, and an evolution mode. In puzzle mode, you are given an arrangement of connected hexagonal panels. Some panels are white and others are orange, and when you tap a panel, it flips over, changing colors. When you flip a panel, all of its connecting panels also flip, so you have to flip the right panels in the right order to ultimately get all the panels to be the same color. Each flip is called a "beat," and the goal in puzzle mode is to get all the panels on the board to be one color in the fewest number of beats. Each beat is counted off of your total, and if you reach negative 10 beats, you'll lose. On all of the puzzles we played, we started off with three beats, effectively giving us a maximum of 13 beats to clear the puzzle. The early puzzles we played were very simple, requiring no more than two or three beats to clear. However, when we tried some of the later puzzles, we found ourselves losing several times before finally figuring out the secret.

There are 200 different boards in puzzle mode, and they open up in a nonlinear progression. Each board is represented by a cell on a large honeycomb grid, and when you clear one cell, all adjacent cells open up. As the rows go down, they get harder and harder, with 20 rows, or "areas," in all. As you get to some of the more advanced boards, you'll encounter special cells that change the way your beats affect the surrounding cells. There are count panels, which act as obstacles and prevent adjacent cells from flipping until you've made enough beats to deactivate the count panel, at which point it becomes a normal panel like any other. There are also panels with vector labels, which flip panels in a certain direction. For example, a vector label might make panels flip in a diagonal or horizontal line all the way across the board. There are also nonvectors, which flip only the panel they are on. It might sound complex, but this is actually a very simple puzzle game that tests your sense of logic more than your reflexes.

If you prefer your puzzle games with a bit more tension, you can play evolution mode. In this mode, the screen fills up with lines of hexagons, and you have to turn all of the panels in a line the same color, which makes that line disappear. The lines keep coming from the bottom of the screen, and if the top line reaches the top of the screen, you lose. Of course, as you progress, the lines start adding up faster and faster. When you lose, you're given a "brain level" rating based on your performance. After a particularly dismal performance, we received a brain rating of "mitochondria," hardly a flattering achievement.

The game is arranged with the puzzle on the bottom screen so you can touch panels with the stylus. On the top screen are some colorful background graphics and occasional text messages, such as "You Lose." The game is advertised as a "musically themed" puzzle game, but unfortunately we were unable to hear any music when we played the game, something that didn't seem to impede our ability to play in any way. You'll be rewarded for your efforts with unlockable music and different backgrounds. With only two panel colors and a bunch of hexagons, there's not much to this game visually, but the clean presentation works fine because it provides a clear view of the puzzle at hand.

There's no word at this time on multiplayer modes for Honeycomb Beat, but with 200 puzzles and the evolution mode, you'll be able to keep busy flipping hexagons for a long time. We'll bring you more details about this interesting puzzle game and a full review when the game is released this spring. 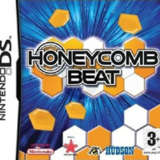