Homeworld gets its first new game in almost 13 years.

Acclaimed RTS series Homeworld is getting a new game, but it's coming in the form of a prequel--and one that takes place on land, rather than in space.

Gearbox and Blackbird announced Homeworld: Deserts of Kharak this week, and surprisingly it's coming to PC quite soon--on January 20. It tells the story of Rachel S'jet, the protagonist of Homeworld 1 and 2, and the investigation of an anomaly discovered in the titular desert.

Most notably, Deserts of Kharak is a more traditional RTS in that it takes place on (or near) the ground. You'll use both land and air vehicles during your fight across the desert, with unit positioning playing an important role as you can ambush enemies.

In addition to a campaign, Deserts of Kharak offers online multiplayer, though there weren't many details shared about what it'll offer beyond ranked play.

This marks the first original entry in the Homeworld series since Homeworld 2 in 2003. Earlier this year, Gearbox released a remastered version of the first two games known as the Homeworld Remastered Collection. Preordering Deserts of Kharak on Steam (where it costs $50) entitles you to a free copy of the collection. Alternatively, if you already own it on Steam, you'll be able to pick up Deserts of Kharak for a discounted price of $40.

Gearbox acquired the Homeworld franchise from THQ in 2013. Deserts of Kharak actually started life as a non-Homeworld game several years ago. At the time, it was planned to be a free-to-play game called Hardware: Shipbreakers before Gearbox and Blackbird decided to partner up on the project later in 2013. 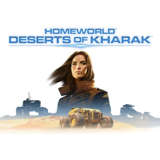