We have not yet begun to fight.

The original Homefront, released in 2011, told the all-too-plausible tale of a newly-reunited Korea’s invasion of the United States. Through some powerful--and horrific--imagery, the game wove an unsettling tale uncommon to the bombastic nature of modern first-person shooters.

Homefront was developed by the now-shuttered Kaos Studios. The rights to the game were sold to Crysis developer Crytek one year later after publisher THQ went bankrupt. This new Homefront, powered by the CryEngine, strikes the same tone as its predecessor, but takes that game's all-too-short campaign and opens it up with an all new open world design.

Homefront: The Revolution is set four years into the occupation of the United States by the Korean People’s Army. Philadelphia--birthplace of American independence--has been twisted into the enemy’s main headquarters, and it falls to the player to take it back. Since open warfare against the technologically superior KPA is no longer an option, players will have to use guerilla tactics to undermine, and hopefully overthrow, their oppressors.

Since open warfare against the technologically superior KPA is no longer an option, players will have to use guerilla tactics to undermine, and hopefully overthrow, their oppressors.

"Our version of Philadelphia is an oppressed, heavily policed environment," said Fasahat Salim, game designer at Crytek UK. "As the player goes through each of the different districts--the game is an open world so you can bounce around between districts--everything you do, each mission or side mission or whatever else, influences the game world and influences all of the civilians who inhabit it. Everything is being influenced by how you approach the game."

That influence is represented by uprising points. As Salim explained, these points reflect the revolutionary state of Philadelphia and are earned throughout the game. "Everything you do, from throwing a brick at a KPA camera to assassinating a high-ranking KPA official, impacts the revolutionary state of the world. How you go about doing these things will also have an impact on the way people respond to you and your idea of a revolution, but either way the KPA will come down hard and try to oppress you as much as they can. Everything that happens in this world is part of a lot of powerful stuff we have going on under the hood."

I only caught a glimpse of this during my brief time with the game, which was a lot of ducking in and out of cover while shooting bad guys in the face. The gunplay felt solid--Crytek is a practiced hand when it comes to making first-person shooters--but also very familiar. Item crafting was actually a big part of what I played as well. I collected supplies and threw together some molotov cocktails on the fly, and later built an RC bomb car that I could control. Since drones were a fan favorite in the previous game’s multiplayer modes, it was nice to see them used again in this sequel.

One thing I found odd was the amount of emphasis placed on the protagonist’s status as an everyman. Multiple times during his introduction to the game, Salim described the hero as being just an everyday guy without any sort of military training. Of course, in the game itself you juggle all sorts of weapons and are able to use them all with precision and ease. I’m not saying this is a bad thing, but it does seem strange Crytek would want to play up this discrepancy between narrative and gameplay.

Either way, Homefront: The Revolution is coming to Xbox One, PlayStation 4, and PC sometime in 2015. There is still much to be revealed about this game’s open-world play style, which will hopefully help it stand apart from a crowded shooter genre. As Salim noted, giving this game an open-ended structure is definitely one of their goals. "We’re trying to avoid a situation where the player has to do something in a very specific way. The player will always have opportunities to approach a situation in a variety of ways. There’s no right way or wrong way, just different ways. What you have in that moment is what you use to get the job done. It’s very emergent." 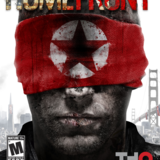