Two-hour documentary on the 101st Airborne, 502nd Parachute Infantry to use Gearbox game footage to depict the group's invasion of Normandy.

Gearbox Software's Brothers in Arms has been putting game players in the first moments of the D-Day invasion of Normandy since March, but it's about to start doing the same for people who've never touched a controller in their lives.

Gearbox, Brothers in Arms publisher Ubisoft, and The History Channel today announced a two-hour special, creatively titled Brothers in Arms, that will use footage from the game to tell the story of the 101st Airborne, 502nd Parachute Infantry from June 6, 1944, and the D-Day invasion of Normandy through June 13, 1944. The in-game footage will supplement firsthand accounts, commentary from historians, photos, and archival footage, all presented by host Ron Livingston (Office Space, Band of Brothers).

Brothers in Arms will premiere on The History Channel on Sunday, December 18 at 8 p.m. EST/PST.

This is not the first time The History Channel has used a game to get its point across to an audience. Eschewing the crude maps and fake footage employed for most military re-creations on television, 2004's Decisive Battles used the Rome: Total War engine to generate entire armies from the Greek and Roman empires. The armies were pitted against one another in scripted battles that depicted nuanced tactics for the audience. 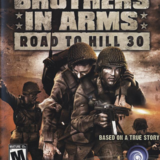