We take a crack at a nearly complete build of this impressive baseball game. Read on for our impressions.

Damned hard to design. That could very well be the subtitle of each and every PC baseball game to hit the marketplace. The combination of a persistent real-world benchmark ("There's no way Fernando Tatis could do that--just look in today's paper!") and millions of stat freaks ("Yeah, like Chick Gandil was really good for a .320 average against lefties in 1919. Everyone knows he's .278, tops.") makes the job of a baseball game designer nearly as antacid-demanding as that of an air traffic controller. All of which makes the High Heat Baseball series one remarkable line of games. From the very beginning, the design team members at 3DO have made it clear that they understand the national pastime. Since the summer of 1998, when High Heat Baseball 1999 emerged as a dark-horse candidate for sports game of the year, the company has been regularly crafting games acceptable to even the most discriminating fan.

That doesn't look to have changed this season. High Heat Major League Baseball 2002 is currently slated to arrive at the end of March with even more features (and one fewer spokesman--Chicago Cubs slugger Sammy Sosa was dropped as the game's pitchman over the winter) than ever before. A look at an alpha build reveals that this is a remarkably full sequel that doesn't follow the standard sports genre formula of providing buyers with little more than a new date on the box and updated rosters on the disc inside. Along with all the series standards, like career play with full custom league support, Internet mode, and the home run derby, come a number of additions that add a lot to gameplay.

Due to user demand, a cutoff man has been added. Now those long throws home can be cut off with the click of a button in an attempt to catch an enemy runner daydreaming. In a similar vein, catchers can snap-throw to any base from their knees. When those opposition runners get used to standard pick-off attempts, use this Pudge Rodriguez-derived tactic to keep them on their toes. Managers can now be sent out to visit the mound in an attempt to calm down their pitcher of the moment. As in real life, this can have a dramatic effect on the situation. In one recent game we played, a shell-shocked Pedro Astacio retired eight batters in a row after one of these conferences.

Inclement weather is perhaps the most intriguing new wrinkle. Rain can move in at any time during a game, causing a delay or even the postponement of the contest altogether. Rain can be very hazardous to a player's health. Pitchers sent back to the mound after a lengthy delay are more susceptible to injury. So it might not be a good idea to put overweight hurlers such as David "Gout Foot" Wells back in there coming off 90 minutes in the clubhouse. Rain can be dangerous even when it isn't falling hard enough to cause the umpires to throw up their hands. Players are more prone to injury on slick turf, a fact that Sean Casey (gone for 271 days after blowing out his knee on the wet Shea Stadium infield) discovered in our redrafted custom league. Three players limped off the field during one drizzly game, all with various leg injuries sustained while trying to make catches on the suddenly slippery field.

Other touches of authenticity include batters taking their cuts in the on-deck circles. Nothing brings home the drama of a nobody-out, two-men-on situation faster than glimpsing Manny Ramirez warming up to step into the batter's box. Base coaches are now stationed at first and third. Watch closely and you'll see them giving signs and gesturing to tell base runners when to stop, run through, or slide.

Injuries are now painfully specific, so you'll immediately know to cry if Greg Maddux goes down with a torn rotator cuff on April 3. Pitchers can move around on the rubber to gain an extra advantage on batters. Speaking of hurlers, a pitching practice mode has been added to complement traditional batting practice. You can even take this opportunity to go up against a particular hitter who's been causing you no shortage of grief. Arguments with an umpire will sometimes erupt at controversial moments. Kick a little too much dirt on umpy's shoes, and you might even be suspended by the league for a number of games.

Stat buffs haven't been left out of the equation. Exhibition mode rosters have been expanded to 35 players, and up to 40 players can be activated for duty with the big league club every September in season and career play. Hitting and winning streaks are tracked and displayed in the pregame matchup screen that sets the stage for the contest about to be played. Statistical compilation screens, like the league leader boards, can now be automatically exported to HTML format for easy Web posting. Dropped throws have been added to the list of tracked errors.

High Heat's oft-criticized visuals have received a much-needed boost this off-season. All-new player models boast twice as many polygons as those in last year's game. This makes a significant difference on the field, where even the portly likes of Brian Bohanon have obvious musculature. Some 300 new animations make games more realistic than ever before. This is most noticeable at first base, where throws range all over the place and add a lot of tension to what were once routine outs. More than 120 custom player faces have been added to make the major-league superstars instantly recognizable. Ken Griffey Jr., Mark McGwire, Roger Clemens, and others are identifiable even when you're staring them down from 60 feet, 6 inches away. Those not given this treatment don't fare so well. Many boast eerie, mannequinlike visages that remind us why so many people are creeped out by ventriloquists' dummies.

Stadiums now tower over players. Go into even a homey facility like San Francisco's gorgeous Pac Bell Park, and you'll be amazed at how the stands and luxury boxes loom over the field. Even familiar settings like Fenway Park and Yankee Stadium have taken on a new, almost majestic, aura. Textures still aren't anything to write home about, though, but the addition of vertex lighting does somewhat improve the overall look. The broadcast crew has been completely revamped. Florida Marlins' radio man Dave O'Brien replaces the low-key Ted Robinson on play-by-play, while Oakland A's color commentator Ray Fosse makes it a two-man booth for the first time. There's one problem with this new format, though: O'Brien is almost as sedate as the narcoleptic Robinson, and he even parrots a lot of the same lines. You'd think that 3DO would have given the new guy a new script.

There remains a lot to be done before High Heat 2002 has its opening day at a software store near you, however. So much needs to be tweaked, in fact, that it's a little tough to imagine the game meeting its current March 27 ship date without the programmers burning some serious midnight oil. The most noteworthy current problem is with statistics, which are completely out of whack in the alpha. Offensive numbers are wildly inflated. In a custom season just completed with just 20 redrafted clubs, eight players--including unlikely lesser lights such as Richard Hidalgo (78) and Tony Batista (80)--shattered Mark McGwire's home run record...by the all-star break.

It didn't stop with pumped-up HR totals. Sammy Sosa and Jason Giambi tied for the RBI lead at the midway point with 235 apiece. Darin Erstad collected 344 hits. Carlos Delgado swatted 94 doubles and Tony Womack pounded 34 triples. The pitching side of the ledger was equally wonky. Randy Johnson threw 349.1 innings in the first half and struck out 504 batters. Nolan Ryan, eat your heart out. It doesn't take a statistical genius like Bill James to determine that something's not quite right here.

The new visuals require some time to develop before moving up to the big leagues. There is a lot of tearing and flicker, particularly on player models. Object collision is still nonexistent. The folks in the broadcast booth may announce a violent encounter at the plate, but the onscreen runner passes through the catcher as if he were a tobacco-chewing version of Casper the Friendly Ghost. This holdover from past editions of the game is particularly jarring right after doubles, when the base runner and the second baseman often seem to be auditioning for the starring role in a remake of The Man With Two Heads. While the giant new stadium architecture is impressive and imposing, it dwarfs the starting nine so much that the default camera angles have been pushed farther away from the play. Whereas previous High Heat releases let you almost instantaneously move in the right direction to make a play, now you're often forced to hesitate an extra moment or two to pick up the ball, which is all that's required for a routine fly to hop into the gap and roll to the wall for a triple.

Pitcher and batter animations--always a little herky, if not jerky--remain oddly out of sync. It's still hard to tell if a batter's making contact with the ball. And while the game supports all manner of pitching styles, the ball's onscreen release point is always the same. Meaning that submariners, like Byung-Hung Kim, seem to be firing sliders from their shoulders.

Many, if not all, of these flaws are apt to be rectified by the time that High Heat Major League Baseball 2002 is finalized. Still, it seems odd that such glaring problems are so apparent at such a late date. Last year's edition of the series, as good as it eventually turned out to be, was shipped with a number of bugs, including one showstopper that prevented double-switching in leagues without the DH rule. Purists weren't happy about that. One has to hope that 3DO has learned its lesson and won't let the new release out before a lot of quality assurance testing, Opening Day or not. 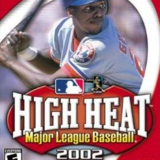