"We've hardly scratched the surface of what's possible with companion games where engagement and access to IP is concerned.

Dave Cox, the veteran Castlevania producer who quit Konami last year after nearly two decades with the company, has announced what he's doing next. Cox has joined mobile game developer Fish in a Bottle, the UK-based studio whose clients have included big companies like Nickelodeon, Disney, and Activision.

At Fish in a Bottle, Cox is taking on the role of Product Owner for Core Games. He'll be leading the development of things like companion apps for AAA games. "It's all about adding value to existing AAA properties by extending them into new areas, such as companion apps," Cox said in a blog post. "Basically helping publishers and developers maximize the spread of their brands."

Cox didn't name any specifics projects that he's working on. But he did talk about why he thinks things like companion apps are so important in the industry today.

"The lines that have divided gaming are really blurred now and players aren’t tied to just one device anymore," Cox explained. "Also, the assumption that core gamers just want core game experiences is wrong. It's not that exclusive, gamers want different kinds of experiences at different times. They can be casual gamers too, and they want to play at home, on the go, wherever they happen to be really. The team here sees that as the big opportunity to extend core game brands.

"We've hardly scratched the surface of what's possible with companion games where engagement and access to IP is concerned," he added.

Cox went on to say that Hitman Go and Fallout Shelter are great examples of how core games and apps "are converging."

"This type of content is no longer an afterthought but a great way to extend your brand and create compelling content," he said. "I'm also interested in looking at bringing traditional toys and games to digital where I think you can reach audiences you could never reach with physical games alone. I'm impressed by the success of digital collectible trading card games like Hearthstone right now."

As for the Castlevania series, Cox said in July 2013 that the fate of the franchise was unclear. Mercury Steam, the Spanish developer that created the most recent entry in the series, Lords of Shadow 2, has since moved on to an all-new IP. 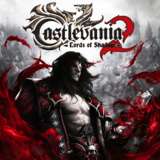