Oh, to be one of those poor saps on the wrong end of one of celebrity chef Gordon Ramsay's fiery tirades! Don't fret, soon anyone with some extra cash to drop can be one of those helpless culinary novices getting a verbal beatdown from the famous chef...in their own living rooms.

Montreal-based gamemaker Ludia today announced that it has signed a deal with television production company Granada America and is taking Fox's reality show Hell's Kitchen interactive. The video game will be available next year on "all major platforms including PC, console and mobile." Ludia is targeting the premiere of the fourth season of Hell's Kitchen for the game's debut.

Ramsay will be lending his voice and likeness to the game, which should give gamers a good target to throw their controller at when he tells them their soufflé tastes like cow excrement. The game will also have some of Ramsay's favorite recipes, which can be printed out (presumably only in the PC version).

Hell's Kitchen is a reality show which pits up-and-coming chefs against one another in a cooking competition. Presiding over the show is Ramsay, a former soccer phenom and hotheaded, expletive-spewing maniac who just happens to be one of the UK's most popular men in the kitchen. Ramsay has leveraged his fame into other shows, including the new Kitchen Nightmares. 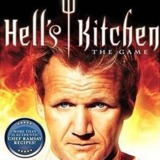