[UPDATE] Gearbox confirms incoming beta test of multiplatform shooter, but Ubisoft has pushed the game back to the first quarter of next year.

With the Halo 3 hype, Wii frenzy, and PS3 announcements dominating the headlines, many lower-profile games are being overshadowed in the public eye. One such game is Brothers In Arms: Hell's Highway, the PC, Xbox 360, and PlayStation 3 World War II shooter from Gearbox Software and Ubisoft.

Thought it was expected to hit retail before the year's end, it now seems Hell's Highway could be taking a detour to an early 2008 release. When asked if the game was still on schedule to ship for the holidays, a Gearbox rep said that nothing is currently set in stone. "Gearbox has yet to announce any release date," cautioned the rep. "There has been a good deal of speculation about the date, but we'll send out a news item when there's a real one. ... [Gearbox CEO] Randy [Pitchford] has recently stated that a release date will be coming very soon."

[UPDATE]: Shortly after press time, Ubisoft circulated an updated release calendar confirming that Hell's Highway would indeed miss its previously announced holiday 2007 launch window. The game will now ship in Ubisoft's fiscal fourth quarter, which runs from January to March. Despite the delay, fans of the series won't be entirely at a loss this year; a Wii version of Brothers in Arms: Road to Hill 30 is set for a December release.

The delay will frustrate fans eager to play the game, but one piece of news that will be universally welcomed is that work on the game--which drew praise for its detailed graphics and intense gameplay at the 2007 E3 Media & Business Summit--is nearing a crucial phase. "We're rapidly approaching Beta status on Hell's Highway," promised the rep, raising the prospect of a Call-of-Duty-4-style test before year's end. 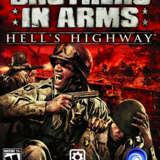