Hello Kitty pawin' at the Cube

Continuing its onslaught of games aimed at a younger audience, Namco Hometek today announced that Hello Kitty Roller Rescue will be purring on the GameCube this August. The game is being developed by Xpec Entertainment, the Taiwanese developer that released the maligned Black Stone: Magic & Steel to the Xbox back in 2003.

In Roller Rescue, Hello Kitty and friends must save Sanriotown from an alien invasion. Block-O, king of the block planet, mistakes discarded gift boxes for his own rectangular kind and sends troops to Earth to liberate them. In her quest to stop Block-O, Hello Kitty will be joined by more than 20 other Sanrio characters, including Badtz Maru, the grumpy penguin, and Kerropi, the happy frog.

The game will be the first Hello Kitty title rendered in 3D. It will be mostly an action game, with some puzzle-solving elements.

Namco holds the licenses of several properties aimed at children. In addition to Hello Kitty, the company also owns the publishing rights to Gumby, Popeye, The Berenstain Bears, and the recently signed gang. 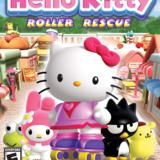