Sega and Amuze announced today that they are releasing the soundtracks to Headhunter and Headhunter: Redemption. Jet Set Radio Future composer Richard Jacques wrote the music for both orchestral scores, the first of which was recorded with a live symphony at London's Abbey Road Studios. The two soundtracks will be released on a single CD on September 21, the same day Headhunter: Redemption ships for the PlayStation 2 and Xbox. 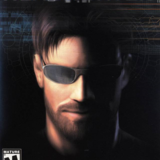