Sega ships the sequel to the 2002 shooter for the PlayStation 2 and Xbox.

Sega announced today it has shipped Headhunter: Redemption for the PlayStation 2 and Xbox. The sequel to the 2002 PS2 shooter sees the return of grizzled skip-tracer Jack Wade, the first game's hero. Joined by new sidekick Leeza X, who is also playable, Wade again journeys into the criminal underworld to investigate another threat to modern civilization. Developed by Amuze, Redemption splits its focus between stealth and action, providing silent infiltration and noisy shoot-outs in equal measure. The game is rated "M" for mature and retails for $39.99. 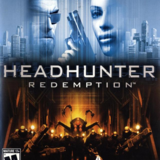