TDK shows off the Xbox version of its action game featuring the cartoon hero.

We had a chance to check out the Xbox version of He-Man: Power of Grayskull at a recent TDK Mediactive event. The game is based on the new cartoon series airing on the Cartoon Network, and as such, it will have all of the voice actors from the cartoon, including Cam Clarke, who provides the voice of He-Man. The gameplay resembles that of a standard hack-and-slash action game, with He-Man having several different attack moves that he can execute with his sword while engaging enemies. Naturally, He-Man can perform some defensive maneuvers as well, some of which involve his shield and others of which are merely used for dodging purposes.

However, you won't play through the entire game as just He-Man. In certain levels, He-Man will be able to ride Battlecat, the massive green armor-equipped tiger. Battlecat can pounce on enemies and attack with his claws, but he can also fire missiles from the two silos equipped on the side of his armor. Unfortunately, you can't dismount Battlecat, so you'll be stuck riding him throughout the level.

The levels are structured in a few different ways. Some only require you to search for keys in order to access new areas, while others will have specific objectives that must be completed. For example, in one level, He-Man has to smash a series of generators built by Skeletor that are stealing energy away from Eternia. In general, the key idea throughout the game is to just kill all of the enemies onscreen and then proceed to a new area.

The build of He-Man that we played seemed as though it was quite early in development. There were quite a few bugs, most of which were created through poor collision detection. In addition, the fighting mechanics were a little off and made it seem as though He-Man wasn't actually making contact with the enemy while fighting. Hopefully these problems will be fixed before the game's release later this year. 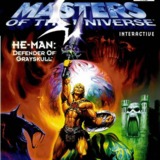 Masters of the Universe: He-Man: Defender of Grayskull
Follow

View Comments (0)
Masters of the Universe: He-Man: Defender of Grayskull