Ubisoft confirms that only the PS3 version of futuristic FPS is currently in development, no plans to bring it to any other platforms.

Originally, Haze was slated as a multiplatform release for the PC, Xbox 360, and PS3 this spring. However, in May, Ubisoft announced that the PS3 had become the "lead platform" for the title and that the game would be released in November only for the PS3. At that time, Ubisoft noted that "no exclusivity for any platform has been officially announced."

Today, Ubisoft amended its statement, saying that currently only the PS3 version of Free Radical's shooter is in development. The France-based publisher also noted that it was still leaving the door open in the future for "new partnerships," but currently the game is indeed only planned for the PS3. A spokesperson said, "The official statement on PC and Xbox 360 is that these platforms are not confirmed."

The Web sites of both Free Radical and the official Haze site now only list the PS3 version of the game. 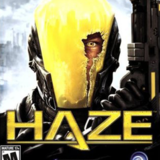