Haven: Call of the King Preview

Traveler's Tales and Midway team up for a unique action game.

Haven: Call of the King, the upcoming game from UK-based Traveller's Tales, is an attempt on the part of the seasoned developer to try something a bit different from the licensed games it has become known for. This original game has been in development for roughly three years now, and a good chunk of that time has been spent developing an engine that will wring as much performance out of the PlayStation 2 hardware as possible. Judging from the performance of an early version of the game we saw, Traveller's Tales seems to be well on its way toward doing just that. Featuring an impressive graphics engine, an interesting mix of gameplay, and a robust story, Haven: Call of the King seems to be coming together quite nicely.

While a great deal of effort has obviously gone into Haven's technology, Traveller's Tales hasn't neglected the game's story, which offers a suitably dramatic frame for the dense gameplay. You'll assume the role of Haven, a young slave from the planet Auria. It seems the Aurians have had a pretty bad run of luck since their king, a very helpful guy by the name of Athellion, headed off on a galactic crusade. Unfortunately, Athellion's absence left the door open for the forces of Lord Vetch to enslave the Aurians and put them to work in the planet's mines. To make matters worse, Vetch infected the Aurians with a virus that will kill them if they're not treated with a drug supplied by the evil lord. As you can imagine, things look pretty bleak for the Aurians. However, before Athellion set out on his crusade, he left behind a bell called the golden voice that his people could ring to summon him. While Vetch managed to keep the bell from being rung when he started his occupation and took steps to ensure it would never be used, it looks as though legends surrounding the golden voice and an Aurian known as the chosen one are coming true. Thanks to a healthy dose of haunting dreams and some advice from a local wise man, it becomes pretty clear that Haven will be the one to ring the bell and save his people. As is the case with most chosen ones, Haven will face some pretty hefty challenges in his quest to find the golden voice and summon Athellion. His first challenge will be finding the voice, which is hidden on a neighboring planet (leads us to wonder if Athellion really wanted to be contacted, but there you go). So, Haven's journey to find the golden voice and free his people will send him on a galactic journey that spans a number of different worlds and brings him into contact with a broad range of people, some of whom will also need his help.

Haven: Call of the King's gameplay will be as robust as its story. The basic structure of the game will revolve around third-person platformer gameplay. You'll explore the various worlds you'll find yourself on just like you would in any platformer. You'll collect health powers-ups, antidote to ensure you hold off the effects of Vetch's virus, power for your personal shield, and items that you'll use to access other areas, like a cog used to make a lift work. In these segments, Haven will handle like any good mascot and feature a solid assortment of moves including double jumps and a variety of attacks. His shield is a regular Swiss Army knife, thanks to its versatility. In addition to protecting Haven from attack for a limited about of time, the shield can be used to attack enemies or mask noises to allow for stealthy movement. Haven's other asset is his mining laser. Once just a tool he used while toiling for Vetch, the laser has been modified by the inventive Aurian and can now be used to attack enemies and catch energy streams that let Haven ride to new areas. Haven's inventing skills also provide you with a robotic bird you can summon for assistance.

More Than Meets the Eye

Although early, the third-person action segments we played were looking quite good. But they were just a part of what the game will offer. In addition to adventuring, you'll be piloting a broad range of vehicles, such as gliders, speedboats, spacecraft, and buggies. The vehicle sequences will be a change of pace for the game and take the form of racing, shooting, or aerial combat. The spacecraft segments will also be part of traveling to other worlds, as you'll eventually find warp gates that take you to new places in your galaxy.

The game's graphics engine certainly makes impressive use of the PlayStation 2 hardware. You'll find just about every special effect the PlayStation 2 is capable of in Haven. Heat distortion, particle effects, light sourcing, real-time shadows, real-time reflections, weather effects, and day-night cycles are all on hand, adding to the look of Haven's polygon-rich and detailed environments. The varied landscape is fractally generated using the PlayStation 2's vector units, which are working overtime for the game and allow for some very impressive effects. For example, when you board a spaceship in a third-person sequence in the game, you'll be able to take off and head out into space without a loading screen. The game will track your movement and reduce the size and detail of the environments as you gain altitude. The reverse is true when you're approaching a planet and go to land--you'll find that detail seen from the air will scale in as you get closer. On a finer scale, the graphics engine is capable of rendering a sizeable number of enemies onscreen at one time. Depending on the size of the enemies, there can be anywhere from several dozen to more than 150 onscreen at one time. Haven himself is modeled quite generously, featuring a detailed outfit with moving elements and a very animated face capable of a wide range of expressions. His overall look is an amusing blend of standard game character elements with a touch of urban style thanks to his cornrows, a hairstyle we just don't see enough of in video games these days.

While it may sound as though Traveller's Tales has focused on tailoring the game to the PlayStation 2, the technology behind Haven's game engine appears to be quite friendly to the Xbox and the GameCube. While the development obviously focused on the PlayStation 2, the team has already gotten the PS2 version running on the Xbox in an amazingly short period of time with a few enhancements, most notably in the in-game water and clouds. The GameCube version, which is slated for release further on down the line, is a bit earlier, but we were able to view a fly-through of the dock level in the game, and it was already looking very good. Traveller's Tales has designed the game to push all the hardware platforms it appears on, including the Game Boy Advance. We'll be especially impressed if they're able to manage the game's seamless loading on every platform.

As it stands right now, Haven: Call of the King is a promising mix of technology and game design that impressed us. The game, which will be published by Midway, is currently set to ship this fall for the PlayStation 2 and Xbox. The GameCube version will follow next year. 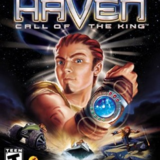