But it does technically have harvesting in it. 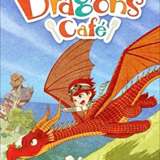 Japanese developer Yasuhiro Wada is best known as the creator of Harvest Moon, though he hasn't been involved with the series in some time. Following last year's Birthdays: The Beginning, Wada is now working on the upcoming Little Dragons Cafe, a feel-good game about running a cafe and raising a dragon. And while it shares the lighthearted atmosphere of a Harvest Moon game, Little Dragons Cafe isn't the simulation game you might expect from Wada.

We recently talked to Wada about Little Dragons Cafe, how his passions have evolved, and why he makes the kinds of games he's known for. He also showed off just under an hour of the game, which, at least visually, is reminiscent of Harvest Moon: A Wonderful Life on GameCube--it has a chibi sort of style with a charming pastoral touch.

"Wonderful Life is probably similar in the sense that it's very comfortable; it's a feel-good environment and universe just to be in," Wada said when we pointed out the similarities. But he emphasized that unlike the Harvest Moon games, Little Dragons Cafe is very much story-driven, rather than an open-ended sim.

You play as one of two siblings, male or female, whose mother has fallen into a deep sleep. In order to save her, you have to raise a dragon--or so a mysterious old man tells you--all while maintaining the family cafe business. You generally follow the story at your own pace, splitting time between maintaining the cafe and exploring with your dragon to find new recipes and ingredients. There is a garden outside your cafe where you can harvest ingredients, but you don't plant anything or choose what grows there; it's all automatic.

"With Harvest Moon and Story of Seasons...I didn't want to create another one, because it's basically competing against my own creation," Wada explained. "I would rather work on something else and create something new for more people to enjoy."

Because a lot of games cast dragons as your enemies, for example, Wada wanted to make a game where you could befriend a dragon. Surprisingly, one of his favorite games is Monster Hunter, in which he's poured thousands of hours.

I want to make a game [that makes] gamers say, 'This is not a game.'

Little Dragons Cafe is hard to classify--it's not entirely a cafe management sim, not an adventure game, and definitely not another take on Harvest Moon. But in a lot of ways, it fits Wada's style, with a wholesome atmosphere and relaxed pace that make it welcoming to a variety of players.

"I want to make a game [that makes] gamers say, 'This is not a game,'" he said. "And for people who aren't interested in games, I want to attract those people."

Dead Cells Is Now Easier, Thanks To Its New Update

God of War: Ragnarok's Tyr Is A Very Tall Asgardian, But Not Lady Dimitrescu Big

God Of War Ragnarok: Everything We Know