We check out Parade to find out what's new in Harvest Moon.

The latest version of Harvest Moon was on display at Natsume's booth, and we had the chance to go eyes-on with the game as we were walked through its new offerings. For those unfamiliar with the franchise, the basic concept is that you're trying to run the most successful farm you can, while balancing your workload with maintaining an active social life. However, with each subsequent release, Natsume likes to switch things up by adding and removing features, sometimes for the better, sometimes for the worse. We're not sure which way the latest version is heading quite yet, but some of the new features seem interesting.

Harvest Moon has long been known to recycle characters from previous games, but using them in different roles, and Animal Parade is no different. The game features a brand-new story with new challenges and stars some of the more popular characters from the series' past. In addition, many aspects of the game have been greatly expanded, such as pet ownership. Now you can have up to three pets at a time, and they can be chosen from a wide selection of animals, such as dogs, cats, bears, turtles, and even weasels. Furthermore, you can now teach each one unique tricks, which should deepen your bond with them. Oh, and now you can ride almost any four-legged animal around, such as cows, instead of being confined to your horse--we're sure they'll appreciate it.

To broaden its appeal to the female demographic, the game also introduces a wide range of accessories that you can clothe your farmer in. In a similar vein, the game also features a photography mode that lets you take a picture anytime you want. Even better, you can set a timer on the camera, letting you position your character in the frame before the picture is snapped. These pictures can then be posted to your Wii Bulletin Board and sent to your friends' Wiis.

Although finding a mate and having a kid has long been a mainstay in the series, Animal Parade will let you, for the first time, have two kids. In addition, you can put those slackers to work right away, toiling in the fields and watering the crops. Gotta teach kids discipline these days, y'know.

If you're a fan of Harvest Moon, stay tuned to GameSpot for more when Animal Parade launches this fall on the Wii. 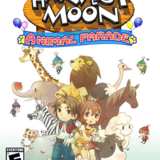