It arrives on Virtual Console later this week.

While Stardew Valley is unfortunately skipping the system for Switch, Wii U owners looking for some farming action will have something new to play later this week.

Harvest Moon 64 is launching for Wii U on Thursday, February 23, in North America and a day later in Europe, publisher Natsume has announced. This news comes as part of a 20-year anniversary celebration for the Harvest Moon series.

"The world has been lucky enough to have Harvest Moon now for 20 years, and we are so proud to have taken a chance on a farming game when no such genre existed in the US," said Natsume CEO Hiro Maekawa. "This is a major milestone for Harvest Moon, and it's important that we thank our loyal fans who have been there since the beginning. 2017 will be a year full of looking back at the games and franchise we love, as well as looking forward to new releases, new surprises, and many things that honor and appreciate our loyal Harvest Moon community."

In addition to that tease, a press release notes that "tons of surprise launches, announcements, and more are still yet to come throughout 2017."

The Harvest Moon series has somewhat fallen out of prominence since its heyday. Despite having the same name in western markets, it's no longer developed by its original developer, Marvelous Entertainment, which now produces its games under the Story of Seasons banner.

The farming/life sim genre received a shot in the arm last year with the release of the aforementioned Stardew Valley, which itself was inspired by Harvest Moon. A previously announced Wii U version has been canceled, although the existing PC, Xbox One, and PS4 versions will soon be joined by a Switch version. 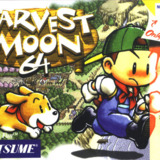