We chase down the snitch in EA's adaptation of the imaginary broomstick sport.

Some of the most exciting moments in the Harry Potter books and movies are the games of Quidditch, the wizarding world's favorite sport that involves multiple kinds of balls and a lot of flying on brooms. Now EA is bringing the Quidditch experience to life in Harry Potter Quidditch World Cup, and we got to check out a new build of the GameCube version at Nintendo's recent Gamers' Summit. The game starts off by letting you pick from the four Hogwarts house teams: Gryffindor, Hufflepuff, Ravenclaw, and Slytherin. The players on each team are true to the early books; Harry is the Gryffindor seeker and Wood is the keeper, and you'll find Draco Malfoy and Cho Chang on the Slytherin and Ravenclaw teams, respectively. Later on, you'll be able to play as international teams and compete in the actual Quidditch World Cup (hence the title).

The actual mechanics of the game seem pretty true to the imaginary sport of Quidditch. During the main part of a match, you'll control your team's chasers as you attempt to direct the quaffle down toward the opposition's goals. You'll see two bludgers flying around the field that you'll have to avoid, and you can pass the quaffle to your other teammates pretty easily at will. As you continue to score points, your seeker will continue to search for the game-winning golden snitch, and once it's been spotted (according to a meter at the top of the screen), you'll switch to a mode where you control your team's seeker against the opposing team's seeker in a race for the snitch. Here, you have to stay on the snitch's trail and use a boost function at key moments to stay ahead of the other seeker and, hopefully, catch the snitch to win the game.

Quidditch World Cup's presentation is pretty good. All of the characters from the books are recognizable during the match, and the announcer will call out their names when they do something notable, which adds a little bit of geek appeal for fans of the Harry Potter books. The game will also feature some more book references--for instance, you can unlock better brooms like the very capable Nimbus 2000 for use in future matches. Overall, it seems like Harry Potter Quidditch World Cup will do a good job of approximating an imaginary, magical sport in video game form, and we'll find out for sure when it ships for all platforms around Halloween. 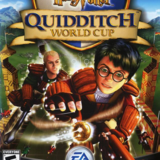