Harry Potter for Kinect conjured up for fall

Boy wizard getting an Xbox 360 motion-controlled adventure from WBIE; players to scan in their faces for created characters.

The Harry Potter novels and films may be done with, but there's at least one more game on the way featuring the coming-of-age mage. Warner Bros. Interactive Entertainment today announced Harry Potter for Kinect, an Xbox 360 game set for release in the fall.

As the name states, Harry Potter for Kinect will rely on the Xbox 360's motion-sensing camera peripheral, letting players cast spells using gestures and magic words. Would-be wizards will also be able to use the camera to scan in their faces for use on created characters.

The game will follow the story of the films, letting players re-create key scenes in control of Harry, Hermione, and Ron, or their created characters. Before the final showdown with Voldemort, players can choose a house to join at Hogwarts, partake in quidditch matches, and take a break with a few minigames. Harry Potter for Kinect will also feature competitive and cooperative multiplayer action.

Although Electronic Arts held the primary license to make games based on the Harry Potter movies, WBIE previously produced a pair of Lego Harry Potter games recapping the complete story. 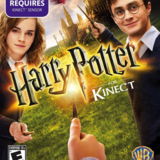