Harry Potter and the Goblet of Fire Hands-On

We grab our wands and brooms for a trip to Hogwarts with EA's latest Harry Potter game.

It's been interesting to watch the evolution of the Harry Potter series over the course of its six volumes, from a fairly lighthearted kids' tale to a much darker story that's drawn in millions of adults as well. This tonal shift has been especially evident in the Harry Potter films--and, of course, the games based upon those films. The latest game in the series is the forthcoming Harry Potter and the Goblet of Fire, which chronicles Harry's accidental entry into the prestigious--but wildly dangerous--Tri-Wizard Tournament, as well as the resulting events that have enormous repercussions for the entire wizarding world. We got a new look at the console version of the game to see how well it will represent the beloved story of the book and film.

Much like EA's other big-huge-fantasy-movie game series, The Lord of the Rings, Goblet of Fire will let you grab two friends and play through most of the game cooperatively. In past games, Harry, Ron, and Hermione actually played differently, but this time, the difference between the characters will be cosmetic only, so you won't be confined to one character depending on which scenario you're in. You've got two basic spell buttons--jinx and charm--and these will invoke different spells in different levels, depending on the requirements of your current predicament.

For instance, we got a new look at the Death Eater attack at the Quidditch World Championship, which will serve as the game's opening level, in which the three friends try to escape a magical assault by the followers of Lord Voldemort, not to mention a host of nasty creatures like the doglike dugbog. Our charm here was wingardium leviosa, which devotees of the Potter books will know allows the user to levitate objects--in this case, large rocks that we could hurl at enemies. You'll also have to use your spells to solve some basic puzzles, such as using wingardium leviosa, along with the other two characters (controlled by other players or the artificial intelligence), to move a massive boulder and clear a path.

Only a few sections of the game will constrain your choice of character to Harry; naturally, those are the Tri-Wizard levels, in which only Harry takes part. The first challenge has Harry speeding around on his broom in a frantic race all over Hogwarts' grounds (and over the castle itself) to beat a dragon. We also got to see the second Tri-Wizard level, which sends Harry to the bottom of a lake to rescue his trapped friends, while he fights off mer-people and grindylows. Both of these levels are different from the regular cooperative ones, not only because you'll play just as Harry, but also because they're a bit more linear, requiring you to travel along a set path, avoiding obstacles and fighting enemies until you reach your objective. EA isn't ready to show off the third Tri-Wizard level, which will naturally be based on the dangerous hedge maze from the book and film, though we're interested to see how it turns out based on what we've seen so far.

We also got to see parts of two new levels based on the herbology and defense against the dark arts classes at Hogwarts. Both of these are similar to the Forest Campsite level, in that they're full of obstacles that you'll often need multiple characters to bypass. In the Herbology level, the three friends had access to the herbivicus spell, which could be used to make plants grow very quickly and in strange ways, which was useful for opening up new areas. In another instance, the spell was useful for opening up seed pods that would attract some nasty vampyr mosps (which are giant beelike creatures with massive stingers, natch).

The Defense Against the Dark Arts level takes place high up in the castle, and features such puzzles as large drawbridges that you'll have to use the carpe retractum spell to lower. You'll be able to revisit these and other levels as you progress through the game. The more powerful your characters become, the more areas you'll have access to, and there will be hidden collectibles to discover that should encourage players to go back and explore further.

In fact, though the spells you'll have access to will depend on which level you're playing, you'll be able to power up each character independently by collecting magic beans throughout the levels. As you finish each level, you'll increase the attributes of a certain spell, which will give it longer range or more power. You'll also have access to a sort of smart bomb that you can activate by collecting enough of the right bean in a given level.

The EA team is focusing more intently on nailing the look of the film in the Goblet of Fire game. Whereas the previous game, Prisoner of Azkaban, had a style reminiscent of the film but with its own elements added, this time around the artists are striving to make the characters look as close to their real-life counterparts as possible. The artists have also worked with the film's production design to create a Hogwarts and a Tri-Wizard Tournament that are both highly evocative of the forthcoming movie. We'll find out how successful they've been when Harry Potter and the Goblet of Fire ships on the PS2, Xbox, GameCube, and PC in November. Stay tuned for more. 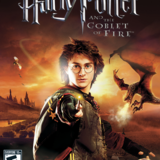 View Comments (1)
Harry Potter and the Goblet of Fire