Forget the mock-up screenshots that have been going around. At E3, Titus proved that Top Gun: Combat Zones is the prettiest adaptation of the movie to date.

Maverick, Jester, Iceman, and Viper are coming to the PlayStation 2 this fall. They're starring in Top Gun: Combat Zones, which will feature 30 fighter-pilot missions spanning '70s, '80s, and '90s. After a year of mock-up screenshots and misinformation, Top Gun: Combat Zones was actually playable at this year's E3.

As in the movie, the general idea in Top Gun: Combat Zones is that you're a hotshot fighter pilot who's sent in to do the dangerous jobs. You are, after all, a top gun. The game itself contains four locations, Southeast Asia, the Persian Gulf, Russia, and Miramar, as well as at least five distinct mission types. Your equipment on these missions is a smattering of popular US warplanes, such as the F-14 Tomcat, the F-18 Hornet, and the F-22 Raptor. Your opponents: MiGs, and lots of them.

The build we saw was incomplete, but quite far along. The final version will contain seven modes of play, including target, pursuit, timed, missile evasion, chase, and wingman down options. We saw the target and chase modes, both of which place a great emphasis on speed and quick reflexes.

As is true of every console flight game, there is a slight learning curve in handling Top Gun. However, once you get used to using the analog sticks and trigger buttons in tandem, you can bank, barrel-roll, and Immelman-turn with the best of them. For the most part, Top Gun plays like Air Force Delta, except you can roll and interact with much of the scenery. As such, targeting is easy and engaging your enemies is as simple as catching up to them.

However, the similarities to Air Force Delta end there, as snagging a target lock-on is barely half the battle. Just like real pilots, when you attain lock-on, the enemy will attempt to evade and thwart your tone. Thus, you have to hound him until you're sure the missile is away or spend time peppering him with the plane's cannons. All the while, you're flying through canyons and between buildings and rolling like a madman. The enemy AI is pretty tough, as on more than one occasion an enemy pilot managed to roll away from a missile, swing around, and shower the plane with cannon fire. Top Gun could use a little better hit detection at times, but otherwise, it seems spot-on for an arcade-influenced flight game.

Visually, the game is doubly impressive. Just as Konami is doing with its Xbox flight game, Titus has given Top Gun: Combat Zones all sorts of smoky missile trails, sunlight reflection mapping, and speed. The behind-the-plane viewpoint is set so close that the F-14's wingspan nearly fills the screen, but there are a few other views to choose from. A flashy neon heads-up display also adds some excitement to the experience, locking on to enemies and flashing warnings when you're too close to oncoming obstacles. The game definitely has a nice, crisp look to it. It has fully detailed plane models, hundreds of realistically designed buildings, and weapon fire that's thick with minute accents, such as smoke trails and lens flares.

The developers still need to iron out a number of tiny gameplay quirks, as well as finish up a few of the game's modes, but Top Gun: Combat Zones is shaping up quite nicely. The game touches down this November. 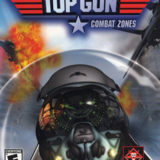