Conspiracy had an unexpected PlayStation 2 racing game in its booth at this year's E3. Gadget Racers is an arcade-style racing game that features hundreds of interchangeable parts, realistic drift physics, and visuals reminiscent of those of Rockstar's Midnight Club.

Right out of left field, Conspiracy had an in-progress PlayStation 2 racing game on display in its booth during the recent E3. Titled Gadget Racers, the game seems to answer to the question, "What would Midnight Club have been like with rocket boosters, wings, jump jets, and underwater stages?"

The key selling points of Gadget Racers are going to be its diverse car selection and breadth of vehicle upgrades. The completed version of the game will feature more than 100 real-world cars and nearly 120 interchangeable parts. In addition to tire, engine, and suspension upgrades, fun add-ons like booster rockets, anchor chains, jump jets, and aerodynamic wings will also be available. To top it off, Gadget Racers will support four-player simultaneous split-screen competition and boast 97 unique courses--some of which will take place in midair or underwater.

Gadget Racers has a very arcadelike feel. Acceleration is quick and handling is slippery, almost like in an off-road game. However, some real-world physics allowances make the mix interesting, namely engine breaking and rear-end drifting. Wings seem to give vehicles more air during jumps and increase your turn radius, while rocket boosters propel cars forward at dangerous speeds.

Visually speaking, Gadget Racers is highly reminiscent of Rockstar's Midnight Club, which may appeal to some and chagrin others. The courses are dark and damp, with great emphases placed on lighting and ambience. As such, legible street signs are plentiful and miscellaneous details such as paper boxes and phone booths are common sights. The water-based levels were incredibly stunning, as you could actually interact with undersea fish while plowing by at breakneck speeds. On the negative end of things, the road textures had visible moiré patterns and the car models were excessively boxy--two issues which may change as antialiasing is implemented and the game hits final QA in the next couple of months. 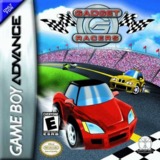