Acclaim and Criterion drop by with alpha versions of Burnout 2 for the Xbox and GameCube.

Representatives from Acclaim and Criterion stopped by the GameSpot offices yesterday to show off work-in-progress versions of Burnout 2: Point of Impact for the Xbox and GameCube. While both versions are still in need of some tweaking before their May release date, they both definitely look to be at least as good as the PlayStation 2 release, which received GameSpot's award for Driving Game of the Year last year.

Both versions of the game will contain a handful of extras that didn't make it into the PS2 version of the game. The Xbox version is receiving the more impressive additions, which include 15 new levels for the ever-popular crash mode, exclusive new car skins, progressive scan support, custom soundtrack support, and full Dolby 5.1 sound support. The GameCube version will have the new crash-mode levels, support for Dolby Pro Logic II, and progressive scan support.

The Xbox version of the game will also feature Xbox Live support for the uploading and viewing of rankings for all of the game's various metrics, which include high scores for crash mode, the longest drift, highest number of burnouts, and so on. You'll be able to view rankings from around the world as well as pare that list down to just the players on your friends list.

Aside from the bevy of extras, both games appear to be just as outstanding as the PlayStation 2 version was. The driving is still some of the fastest racing around, and the track design is reminiscent of some of the greatest arcade racing games.

We'll have more information on Burnout 2 soon. In the meantime, we have new screenshots of both the and versions of the game. 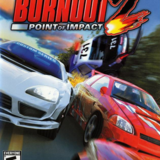