We recently got our hands on a build of Titus' upcoming PlayStation 2 fighting game, Barbarians, and got a good look at what it has to offer. The premise behind Barbarians is similar to that of Capcom's Power Stone series, in that characters fight in full 3D environments, using virtually any part of the scenery as a weapon. For example, we were able to uproot trees and beat our opponents with them, lift cart wagons overhead and fling them, and even rip metal grates from the walls. The arenas themselves are impressive--most are made up of several large chambers linked to each other in succession. If a character walks through a door or falls through a pit, the action is taken immediately to the new venue.

Barbarians currently features 10 playable characters in large multileveled arenas, which can be explored in both quest and versus modes. Each character represents an element, and most characters feature special move techniques, accompanied by flashy particle effects and over-the-top animations. One character, a patchwork twin-blade-wielding zombie reminiscent of Mummy Commando from Capcom's Captain Commando, expels a swarm of knives from his chest, which fly through the air and rain down in a damaging circle around him. There are characters modeled after the standby Conan archetype, in both male and female forms, as well as their more mystical counterparts. Bobo, the giant ape, shows off some vigorous chest beating in true King Kong style, as well as some comical animations, like when he sits down for a rest and drums his fingers impatiently.

The quests are mission-based combat scenarios that put you into situations where the win condition is more involved than simply defeating your opponent. In one quest, for instance, Bobo is perched atop a balcony, flinging giant stones at your warrior, as two cronies fervently attack. The trick to defeating Bobo is to snatch up the stones as he tosses them and stack them up under the balcony to reach his vantage point, bringing him into the fray. While the control is still quite early and can use continued work, it appears that these quests could prove both challenging and rewarding in the future.

The four-player battle mode was also available, albeit with two of the characters controlled by CPU bots. The game runs at a steady pace despite multiple characters onscreen, each executing special moves and tossing projectiles every which way. We encountered great difficulty in precisely controlling the jumps and in initiating a block command, and we noticed a number of other glitches that were likely due to the unfinished nature of the build. While Barbarians is still early, we look forward to examining its progress and reporting on it here. 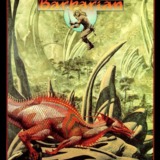