We take the wheel of Capcom's new PlayStation 2 driving game.

While you would expect Auto Modellista to feature a more lighthearted take on driving and physics, the game does feature some simulation-style gameplay elements. In the game's main mode, called garage life, you can pick and choose from plenty of different cars from manufacturers like Honda, Hyundai, Chevrolet, Dodge, Ford, Nissan, Toyota, and more. Each car can be tricked out in various different ways, as the game gives you the ability to try on a variety of hoods, wings, aero parts, and headlight styles. You can also design your own stickers and place them on the hood, windshield, sides, and bumper, among other spots. But tweaking your car's look isn't the only thing you can do. You'll unlock tuning parts as you race, and these parts let you upgrade your car in a variety of departments, such as the engine, muffler, turbo, computer, and weight. You can also put different tires on your car, adjust its suspension, and play around a bit with your braking and gear-ratio settings. In the end, these items give the game a decent amount of depth.

While there's a lot to see in the game's single-player mode, the game also sports a full-on online race mode that supports up to eight players. The game's online mode is available only to players with broadband connections. In the online mode, you can jump around the server's various lobbies and join or host games. The game keeps track of some ranking data as well. The few games we've tried so far were definitely functional, though we've occasionally seen some of the other cars move in a rather unnatural way.

We'll have a full review of Auto Modellista next week. 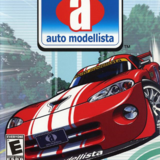