We sat down with SNK's Samurai Shodown Warrior's Rage for the Sony PlayStation today, and we've got a huge pile of screens and some first impressions.

With only two characters returning from the old 2D SS series (Haohmaru and Hanzo), Warrior's Rage feels like a whole new generation of game, beyond the obvious 3D graphics. Anyone who has played Samurai Shodown 3 or 4 will find the controls very familiar. While the game doesn't move into the 3D plane like Toshinden, for example, you can still dodge attacks with a momentary lunge into the background, which, if timed right, will avoid your opponent's initial attack. Other buttons function as a kick, slash, and strong slash button.

The graphics are running at a high resolution, while the action speeds along at a surprising 60fps. Superior by leaps and bounds over SNK's other 3D fighter, Fatal Fury Wild Ambition, gamers should take this as encouraging news that SNK is planning to publish all of its Japanese hits in the US. Samurai Shodown Warrior's Rage is scheduled to ship in early 2000. 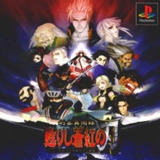