Lara Croft was putty in our hands as Eidos and Core Design took us for a controlled spin with the upcoming Tomb Raider III.

GameSpot News had a chance to play the latest version of Tomb Raider III for the PC on Tuesday. We also had the opportunity to talk with Adrian Smith, Operations Director at Core Design, the company behind this and the previous two Tomb Raider titles.

The latest versions of Tomb Raider III we saw demonstrated many of the new graphical effects, as well as new gameplay features. Visually, the game looks a lot cleaner than Tomb Raider II - and it should since TRIII is running in hi-res color. Many of the new effects - such as the new dynamic lighting, new water rippling and splashing effects, give the game a more realistic look. One really neat water effect happens when animals and enemies are gunned down in the water. Their blood give the water a dark red taint and then dissipates in the water.

In addition to better control and the new look of the game, Lara has learned some new moves of her own. Besides her usually running speed she can now call upon a burst of speed when she needs to outrun something. Lara can also grab on to vines or the underside of a bridge, for example, and perform a hand over hand monkey bar style swinging action. One of her other new maneuvers is a low-to-the-ground crawl.

One of the new vehicles that Lara will get to pilot in Tomb Raider III will be a canoe. Players will get to take the canoe down a treacherous stretch of river. If the canoe breaks up over some of the rocks in the river, players can pound on the buttons to try and get Lara to stay above water till she gets past the rapids.

Check back tomorrow to hear about some of the new environments and the new integrated game-saving features of Tomb Raider III. 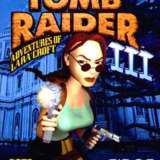