Capcom and Namco are involved in a joint-project to develop the arcade incarnation of Resident Evil. Read our hands-on impressions.

Capcom recently announced through its official Japanese Web site that it is codeveloping a new arcade shooter titled Resident Evil: Fire Zone. The game is being codeveloped with Namco, and it uses a Naomi board. The arcade title was recently being beta-tested in the Capcom Plaza in Kichijoji, Tokyo, and GameSpot was there for some hands-on play.

The game is based on Resident Evil: Code Veronica, Biohazard in Japan, and the first player takes the role of Claire Redfield, while the second player uses Steve Burnside. Steve will appear as a CPU-controlled character from time to time when playing a single-player game. Fire Zone itself resembles the first-person shooter mode in Code Veronica, where you start out with a limited amount of ammo and fight your way through several rooms, gathering weapons, ammo, and items, to get to the end of the stage. In this case, though, a boss character exists at the end of each level.

The arcade machine used for Fire Zone is based on the arcade machine used for Gunmen Wars, a Quake-style arcade game released by Namco in 1998. The machine gun is attached to the joystick--it didn't feel like a joystick, rather like a relatively soft stick shift on a car--and pushing the stick forward and backward moves the character in the corresponding direction. Pushing (not tilting) the stick to the left or right turns the character in those respective directions. The gun doesn't require you to aim at a target, since you don't have the versatility of pointing the gun at different locations on the screen. The button on the side of the gun has multiple functions, and it is used to swap your primary and secondary weapons, use items, and open doors.

It's possible that the game is running on a Naomi GD-ROM, as opposed to a Naomi board, as a brief door-opening load sequence runs whenever the character enters into a different room. There are several cutscenes in the game, and they resemble the CG movie portions in Code Veronica. However, there was no voice dubbing for the characters, only Japanese subtitles.

Though the game is in beta phase, Fire Zone could an impressive game when it is released in Japanese arcades. Resident Evil: Fire Zone is scheduled to appear at the AOU Amusement show this month in Japan. Capcom does not intend to release the arcade title in North America at this time. 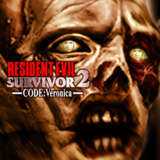