Westwood showed off its upcoming hack-and-slash action game at E3. Laden with high-seas sailing and swashbuckling, it may bridge the gap between adventure games and shooters.

Pirates of Skull Cove is both a 3D adventure and a boat-battle game. Fifty percent of the game details the swashbuckling antics Katarina, the story's protagonist. They're out to topple the villains who rule the islands and seas of the world, as well as snag some snazzy loot along the way. Half the time, this entails running around an island and battling monsters, usually with a sword or explosives. The rest of the time, you'll be sailing a galleon on the high seas and shoving cannonballs down the throats of other pirate ships.

In playing the game at E3, the most interesting aspect of note was how Westwood is trying to make Pirates of Skull Cove into an action game with RPG and growth elements. As you slash your way past pirates, your levels in a number of characteristics increase. The higher they rise, the stronger you become. On the open sea, you can also customize and enhance the ship you sail, taking it from a lowly steamer to a full-fledged pirate galleon. In practice, the game remains action-oriented and entertaining, but the earned improvements do have significant effects, namely increasing your cannon ability or augmenting your defense.

The general feel of the game is action. Combat is all in real time and requires repeated button presses, while the piloting of the ship entails sailing forward, turning, and choosing which attack to fire off with the action button. The rapid acceleration of the ships themselves also plays into to the game's action premise, as they'll go from zero to 60 faster than most automobiles. Smoke-laden weapon trails also lend to the overall excitement of the game, especially in the ships' sail-tearing shots or the plumes that leap off thrown barrel grenades.

Where Pirates of Skull Cove needs the most work right now is visuals. Although the game easily eclipses most first-generation PS2 titles, the textures are still far too simple and there are way too many polygon dropout problems to forgive. Despite these woes, though, the game's six environments all have a distinct jungle and volcanic atmosphere, which includes such amusements as swaying palm trees and falling coconuts. The sailing aspect of the game needs work also, mostly in that the water textures lack transparency and definition and the low-lying rocks and islands that dot the sea look pretty rough. Still, for a PS2 game that's barely 25 percent complete, it's already showing great potential.

Eventually, Pirates of Skull Cove will also have a number of multiplayer sail-and-shoot arenas. How these will be implemented is still a mystery. Those interested in a game that seems to cross Ape Escape with Sword of the Berzerk and throws in some boat-based shooting for good measure should look for Pirates of Skull Cove this November. An Xbox version is also planned for a subsequent release. 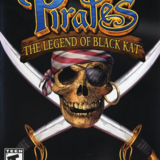