We check out THQ's upcoming racer based on the Hot Wheels license.

We recently had the chance to check out the PlayStation 2 and GameCube versions of THQ's Hot Wheels racer. The game's working title is currently just Hot Wheels, although it is expected to change before the game's release. The game is being developed by Beyond Games, most recently known for Motor Mayhem on the PlayStation 2.

The game will offer you five massive levels to explore. In the game's single-player mission mode, you will have to complete about 25 missions. The main plot of the game finds you setting out to retrieve Hot Wheels cars stolen by a group of evildoers. You will eventually be able to collect roughly 35 Hot Wheels cars and use them in the game. The game will provide 12 power-ups, which will have a variety of offensive and defensive uses.

We were able to check out three of the areas: Monument City, Crankshaft Bay, and Turbine Sands. The areas were massive and featured a host of shortcuts and secret areas. Their overall design called to mind a Hot Wheels track gone wild. Besides the traditional stretches of road, you'll also find segments where you can race up buildings and where bits of track send you shooting into the air.

Control is solid and simple--you'll have one button for accelerating and one that serves as the brake and another for reverse. When in the air you'll use the triggers to perform stunts. If you successfully complete a stunt, your turbo meter will charge and increase your car's speed.

The GameCube and PlayStation 2 versions were almost identical at this stage in development. The frame rate for both versions of the game was already high and steady, and the detail was clean. Texture quality was slightly tighter on the GC but not by much. At present both games are due out this fall. 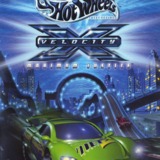