Grandia makes its way to the Game Boy Color with the new spin-off series, Parallel Trippers.

Hudson displayed Grandia: Parallel Trippers for the Game Boy Color at Nintendo's Space World event. The Game Arts-developed RPG puts you in the role of Feena and Sue. Walking across the field map is handled in a way similar to Final Fantasy Adventure or the Zelda games. Enemies also appear on the field with you, and connecting with one transfers you to the battle mode. The battles sport the appearance of Dragon Warrior with gameplay similar to the original Grandia. The battle uses a special gauge to designate each combatant's turn. There are slots in the gauge, and depending on where your characters are slotted alters their turn schedule. In addition, you can set up and trigger chain combos both on standard attacks and spells. The scenario at this point is a little weak, and it seems like it's been made strictly to please Grandia fans.

Grandia: Parallel Trippers for GBC is scheduled to hit Japan on December 15 for 4500yen. 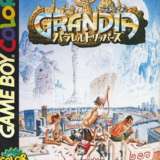