We check out THQ's upcoming game based on Sega's arcade hit.

At a recent press event, THQ showed off its upcoming Game Boy Advance title based on Sega's Crazy Taxi. The game is being developed by Graphics State, and it manages to work in quite a few of the features found in the Dreamcast game. We tried the early version of the game on display at the event. While still very rough in places, the game was slowly working its way toward capturing the feel of its console and arcade cousins.

The popular arcade game was released in 1999 and found its way to the Dreamcast at the beginning of 2000 with a few extra game modes included. The game put you in the role of one of four cabbies and charged you with picking people up and delivering them to their destinations as quickly as possible to earn money and restore time to the game clock, which counted down as you played.

The Game Boy Advance game features two modes: crazy taxi and crazy box. Crazy taxi will let you choose from the four original cabbies and test your skills in one of two cities. Crazy box is a minigame mode that features nine games taken from the DC game, such as timed challenges in which you'll be asked to pop balloons with your car.

The arcade-style gameplay has made a decent transition to the Game Boy Advance. You'll just have to worry about brakes, gas, and shifting into reverse when needed. The early build needed some polish on the car handling, but, other than that, it stayed true to the series' gameplay mechanics.

The roughest aspect of the game's presentation is its chunky graphics, which mix Mode 7 effects with polygonal elements. While it's a nice touch to see the polygonal elements in the game, the ambitious engine pushes the Game Boy Advance hardware pretty hard. At the moment, this translates into an inconsistent frame rate and some pop-up. On the other hand, the sound in the game is well done and makes good use of the existing sound samples from the first game.

Crazy Taxi will need some tightening up before it ships. While the gameplay does a fine job of capturing the feel of the original games, the graphics and car handling could use some work. Crazy Taxi is slated to ship this March for the Game Boy Advance. 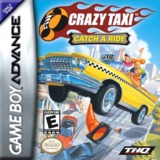