Universal let the press play the handheld version of Crash at its recent gamers' day event.

Universal Interactive held its gamers' day event yesterday and showed off Crash Bandicoot for the Game Boy Advance in playable form. Under development by Vicarious Visions, the same company responsible for Tony Hawk's Pro Skater 2 on the Game Boy Advance, Crash is just 40 percent complete, but the side-scrolling platformer is already looking like one of the handheld's most visually impressive games.

Cortex has returned yet again for Crash's first outing on a Nintendo platform, and this time he's constructed a world minimizer that he's used to shrink the planet to the size of a piece of fruit. Crash must rely upon his sister Coco to restore the planet while he seeks out Cortex and attempts to end his vile plans once again. The gameplay included in Crash Bandicoot for the GBA is representative of the series' 3D roots. The traditional jump and spin platforming mechanics that are prevalent in Crash's PlayStation and PlayStation 2 incarnations have made the conversion without a glitch. In addition, there are chase scenes where Crash runs toward the camera and minigames that ask you to collect as many gems as possible within a given time limit.

Crash for the GBA is one of the more visually stunning games on the platform. The bandicoot has more than 1500 frames of animation, and the colors are bright, vivid, and full of life. Of the game's 20 levels, we were shown the jungle, underwater, arctic, and arctic-chase sections of the game. Arctic chase was by far the most impressive of the levels shown. In it, Crash is planted on a polar bear and is being chased by a huge yeti through a cave. As Crash runs toward the screen, you must dodge TNT boxes and barricades in hopes of reaching the end of the cave before being caught. The scaling used in this section is amazing, and it almost fools you into believing you're playing one of the PlayStation versions of Crash.

Like its 3D brethren, controlling Crash in his Game Boy Advance guise is simple yet addictive. Pressing the A button makes Crash jump, and pressing the B button makes him perform his patented spinning attack. Pressing and holding the R button will cause Crash to duck and crawl, and holding the L button will make him tiptoe. For the series' first foray into 2D, Crash controls surprisingly well.

Vicarious Visions has promised plenty of rewards for those who attempt to uncover every secret in the game and has designed the AI to be elastic so that it gradually changes depending upon the skill of the player. Despite being so early in development, Crash for the Game Boy Advance already possesses the series' art style and plays quite well. We'll have more on the game when it becomes available. 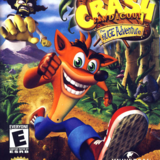