First time on the Cube for this mech classic; Nintendo plans hardware bundle around upcoming title.

Bandai plans to release a Gundam title for Nintendo's GameCube console, according to Famitsu magazine. This will be the first time Gundam will appear on the Cube.

The GameCube title, Kidou Senshi Gundam: Senshi tachi no kiseki, will be based on the original Gundam and its one-year war story, which kicked off the epic series. The title of the game translates to English as Gundam: Tracks of the Heroes.

Kidou Senshi Gundam: Senshi tachi no kiseki plays as a 3D action shooter, where the gamer plays as one of the pilots and controls a mech to battle through various operations using a number of weapons via numerous actions. Each of the pilots, including the main character Amuro and his famous rival Char, have different abilities. In completing the battle missions, gamers will need to set up strategies by looking at the appropriate field map, checking out the enemy's data, and ordering partners to follow specific in-game strategies. Mechs from the original Gundam, such as RX-78-2 Gundam and MS-06 Zaku II, are confirmed to be in the game.

Kidou Senshi Gundam: Senshi tachi no kiseki is 50 percent complete, and is scheduled for release next year in Japan. In commemoration of the game's release, a special GameCube bundle that reflects Char's trademark red color will be released later this year in anticipation of the game.

The limited-edition package, to be released November 27, will sell for 21,000 yen ($190) and will include the red-colored GameCube console, a red GameBoy player, a red Zaku II action figure, and a special demo disk of the upcoming Gundam game. 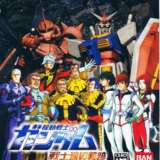