We take the U.S. version of Gundam Side Story for a spin at this year's E3. Find out what's different inside.

As usual, Bandai is betting that a strong anime connection will help sell its games, and in the case of Gundam Side Story 0079, the company is backing up the anime with decent gameplay. Probably the easiest way to describe the game is to compare it to past mech combat games such as Mechwarrior 2, because the game structure is basically identical.

Missions in Side Story 0079 are preceded by a video mission briefing as well as occasional communications from other, lesser officers. After mission goals and weapon loadout have been covered, the player is dropped directly into the field, usually with teammates in similar mecha. The accomplishment of mission goals is interspersed with occasional skirmishes with Zaku mechs. The player mech is outfitted with a variety of weapons, including machine guns and grenades, although perhaps the most interesting weapon is a Gundam trademarked energy sword. Teammates feature a fairly complex commandment system; you won't be able to blame your deaths on bad teammate AI anymore.

The graphics are pretty impressive, and the mission environments evoke a decent sense of "being in the field." Gundam and/or mech fans should find a lot to like about Gundam Side Story 0079. 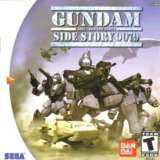 View Comments (2)
Gundam Side Story 0079: Rise from the Ashes