Banpresto's new Gundam game will play in a capsule-shaped machine with a 180-degree panoramic screen for a full cockpit view.

Every so often, an arcade game manufacturer makes a machine that seems extremely costly for arcade operators, yet is too fascinating for them to ignore. We found one such game at this year's Amusement Machine Show in Japan in Banpresto's new Gundam game: Gundam: Senjou no Kizuna (Gundam: The Bonds of War). Banpresto's booth had eight of the machines on display, four reserved for dealers only and the remaining four for other industry folks. While machines that are reserved for dealers are usually less crowded than those for the press and other industry visitors, both sides had lines with a wait of 70 minutes (the longest of all games at the event floor), indicating the popularity of the machine.

The difference between previous arcade Gundam games and Banpresto's new Gundam: Senjou no Kizuna is the gaming experience. Gundam: Senjou no Kizuna is played inside a unique, circular capsule called the POD (Panoramic Optical Display), which is just large enough to fit one player. You go into the capsule by opening a door on the left, and once you're seated in the cockpit, you'll get to virtually experience riding as a pilot inside a Gundam mech. The capsule's circular interior surrounds you with a 180-degree screen, which pretty much covers your full visibility range from top to bottom and left to right. Intensive as it is, Banpresto had a warning sign near the machines that cautioned visitors not to ride on them if they're prone to getting motion sickness.

In moving around you use two handles and two foot pedals. The handles are controlled similarly to most standard mech games. You hold both of them forward to advance and backward to retreat, and you can tilt both of them to the left or right to move sideways. If you want to rotate around, you tilt one handle forward and the other handle backward. Your basic attack is to shoot beams at the opponent, which is done by pulling a trigger on the right handle. There's also a button on the handle that lets you lock on to your target, which makes shooting easier. When you're face-to-face with your opponent up close, you use your left handle's trigger, which lets you attack with a light saber. The two foot pedals are used to give extra mobility to moving around in the battlefield. The left pedal is used for jumping, while the right pedal is used for dashing.

While Banpresto only had eight capsule cabinets at its booth, Gundam: Senjou no Kizuna actually allows for up to 16 players to play simultaneously, with eight people playing as the Federation side and eight people playing as the Zeon side. The game is network-enabled and lets gamers from different arcades play with one another, which seems extremely important in the case of Gundam: Senjou no Kizuna, considering no arcade is likely to have 16 cabinets. Teamwork is an essential part of Gundam: Senjou no Kizuna, and Banpresto calls it a "tactical team fighting game." Users will need to take advantage of the field's terrain to strategically ambush enemies for a victory. There are buttons on the right side of the cockpit that let you send signals to your teammates to communicate with them in real time.

While the demo at Banpresto didn't let users take advantage of the game's IC card system, you'll be able buy cards and record your game data on them when Gundam: Senjou no Kizuna is officially released. You'll use two cards in playing the game: one that contains your pilot data and one that contains your mobile suit (mech) data. You can purchase new mechs and weapons via a touch-screen-controlled terminal unit, which will be available in arcades when the game comes out. Gundam: Senjou no Kizuna will be distributed by Namco, which will be merging with Banpresto's parent company, Bandai, on September 29.

Gundam has always been a popular franchise in Japan, but its game sales have been dwindling after getting milked down too much, as most recently indicated by the devastating price shock on Bandai and Namco's collaborative PS2 project, Kidou Senshi Gundam: Ichinen Sensou. The game had dropped to less than half the manufacturer's suggested price in just 10 days after its release, causing alarm among retailers and wholesale dealers in Japan that the series was no longer a stable moneymaker. With Banpresto's new Gundam arcade game being unveiled less than half a year after the price-shock incident, it would have been expected that arcade operators would be less inclined to be interested. But the AM Show proved that the Gundam franchise still has its strength left and that new machines promise to attract attention. 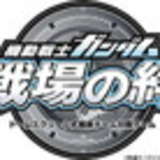